HOW TO DUNK A DOUGHNUT: THE SCIENCE OF EVERYDAY LIFE

Len Fisher attracted media attention around the world with his experiments on the physics of biscuit dunking. His studies resulted in the receipt of a spoof ‘Ig Nobel Prize’ award, a letter of commendation from the Government Chief Scientist,  a nomination by The Times newspaper as an ‘Enemy of the People’, and an award from the American Institute of Physics for Popular Science Book of the Year by a scientist.

Here he tells the true story behind this and other projects in which he looks at everyday phenomena and reveals how they can be used as a key to open a door to science. In doing so he shares his insider’s perspective of what scientists do, why they do it and how they go about it.

The book provides scientific answers to such familiar questions as how to dunk a biscuit, how to check a supermarket bill quickly, how to use DIY tools more efficiently and how to use the laws of thermodynamics to boil the perfect egg. It shows the reader how to catch a ball scientifically, which vegetables absorb the most gravy, and even how science can improve your sex life.

Science is all around us, and this brilliant book shows you where to find it and how to put it to good use.

Buy How to Buy a Doughnut on Amazon.com 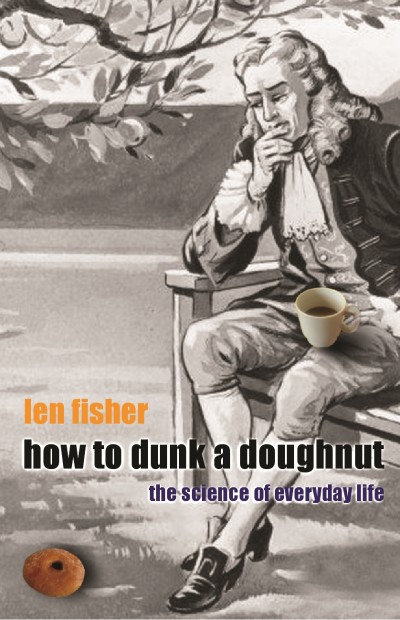 “Scientists, like hangmen, are socially disadvantaged by their trade.”
“… guests at parties, having discovered that I am a scientist, usually turn to my wife and ask her what I do, rather than approach me directly.”
“This book is for them, and for everyone else who wants to know what scientists really get up to.”

1. The Art and Science of Dunking

2. How Does a Scientist Boil an Egg?

Science in the home workshop

4. How to Add Up Your Supermarket Bill

Quick calcs at the check-out

5. How to Throw a Boomerang

6. Catch as Catch Can

Does our brain act as a high-speed computer when we run to catch a ball?

7. Bath Foam, Beer Foam and the Meaning of Life

The thin molecular divide between life and death

8. A Question of Taste

The science of gastronomy

9. The Physics of Sex

How the sperm that is the best physicist wins the race to the egg
Buy How to Buy a Doughnut on Amazon.com
Share This