The real dangers of Australia

Many of our European friends have expressed apprehension at the idea of visiting Australia on account of the ferocious sharks, poisonous snakes, spiders and jellyfish, etc. But the real problems lie elsewhere:

Some birds laugh at you:

Some spiders won’t let you near the toilet roll:

Others try to steal it:

and some can even dance:

They are all bastards though (classification courtesy Tom Wykes):

The snakes steal your sausages:

and the kookaburras nick the chicken:

The lizards can be taller than you are:

and the crocodiles can jump even higher:

And while all of this is going on, kangaroos watch your every move:

While you need to watch the moves of snakes in the loo (this is a genuine notice!):

On the other hand, there are some extraordinarily pretty dancing spiders:

Although it has to be admitted that it can get a bit wet (June 5, 2016; photo jakobdezwart.com):

and watch out for wombats! News story August 22, 2016: A Canberra woman has been attacked by a wombat (https://www.theguardian.com/australia-news/2016/aug/22/woman-attacked-by-wombat-thought-she-was-going-to-die): 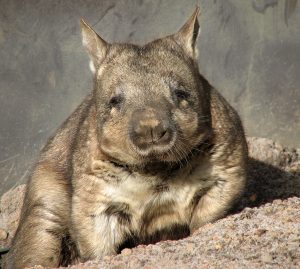 Oh, and look out for the dropbears:

and the thousands of unidentified tiny flies (subsequently identified as Rutherglen bug) that stop us from going out on the our verandah (Dec 4th, 2016):

and the weirdest caterpillar I have ever seen climbing up our front door jamb (subsequently identified (http://lepidoptera.butterflyhouse.com.au/naco/auctar.html)) :

and finally, what do you think the outcome might be of a fight between an injured owl and a pit bull terrier?

You’ve guessed it, of course. The owl was a Powerful Owl 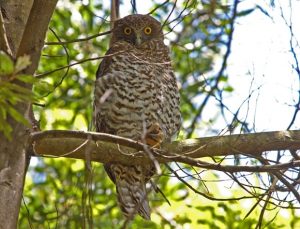 which can be 60cm high. This one was on a perch, tethered by a loose chain, when the pit bull terrier went for it. The owl rose two feet into the air and came down square on the dog’s head, pecking its eyes out for starters before getting down to the serious business of dismemberment.

Lesson: Don’t mess with Australian wildlife. They all want to kill you. Even when they can’t: 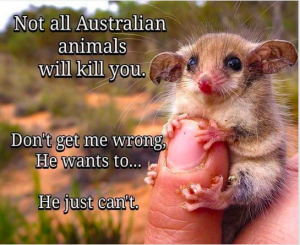 Even when they don’t want to kill you, they certainly want to screw you

AUSTRALIA: HOW CAN YOU RESIST IT?