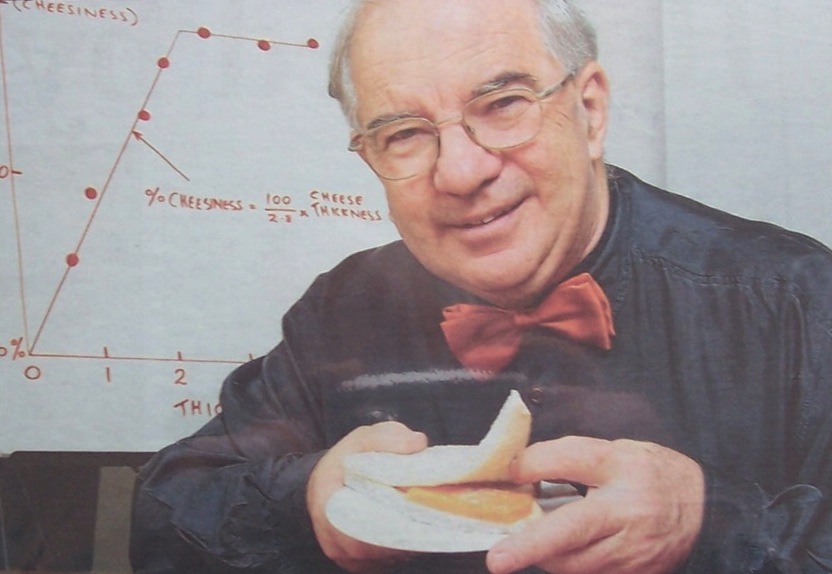 Another project that used MSNose was to work out how much cheese there is in the ideal cheese sandwich. This project produced a real scientific surprise – there is no gain to be had by adding more cheese above a certain thickness, because this does not produce any more release of flavour. I am still trying to work out why!

Here is my full report to the British Cheese Board (minus the diagrams – email me if you would like a copy). They wanted it for publicity, but the science is real, even if preliminary, rather simplistic and (dare I say it) light-hearted  (but that’s how science projects often start):

Optimum Use of Cheese in a Cheese Sandwich

Aim: The aims of these experiments were to measure the concentration of “cheesy” aromas released when a cheese sandwich is chewed and swallowed, to find out if there is a way to maximise the release of these aromas, and to examine the effects of added foods (such as tomato or chutney) and temperature on the release of the aromas.

Approach: The measurements were performed using MSNose, a revolutionary machine invented by Professor Andy Taylor at the University of Nottingham, which measures the concentration of different aromas that are released to the back of the nose as we eat, and which give us our perception of flavour. The experimenter sits at the machine with a plastic sampling tube comfortably inserted in one nostril. The machine takes a sample of each breath, analyses the aromas present, and measures their concentration. In the present experiments three major aroma components of cheese were measured, and the strongest (2-methyl propanal, molecular weight = 73) was used as the principal indicator of “cheesiness”.*

*Many different aroma molecules contribute to the overall perception of flavour. The concentrations of most of these molecules are too low for accurate measurement, which is why the present experiments concentrated on the principal components.

The experimental protocol was to make bite-sized sandwiches, 30mm x 30mm, using pre-sliced white bread which had been lightly buttered with margarine, and with different uniform thicknesses of cheese.

In practice the amount of cheese in each sandwich was weighed, and the thickness calculated from the weight. Eight British cheeses were studied: West Somerset Cheddar, Caerphilly, Wensleydale, Cheshire, Blue Stilton, Red Leicester, Double Gloucester and Somerset Brie. For some experiments with West Country Cheddar, tomato, cucumber, apple or Branston pickle was added to the sandwich. The amount of butter or margarine was also varied in one set of experiments to test the effect of the change.

Summary of Findings: The main finding was that concentration of “cheesy” aroma reaching the back of the nose initially increased in proportion to the amount of cheese in the sandwich, but reached a definite limit which depended on the type of cheese. This was quite unexpected; for other foods that have been studied by the MSNose technique (chocolate, crisps, chewing gum, mints), the concentration of aroma released increases in proportion to the amount of food in the mouth apparently without limit.

For cheese sandwiches, then, there is an optimum thickness of cheese whose value depends on the type of cheese (see Table below). Somerset Brie may be an exception to this rule – unfortunately, the concentration of the aroma chosen as a marker was too low in sandwiches made from this cheese for reliable results to be obtained.

There was a linear increase in retronasal concentration of 2-methyl propanal with the thickness of the cheese up to a certain level, which meant that the “cheesiness” of a sandwich could be described by a simple equation. For West Country cheddar the equation is:

A similar equation applies to the other cheeses, with the figure of 2.8 replaced by the optimum thickness for the particular cheese.