The Future of Food: An Integrated Global Challenge 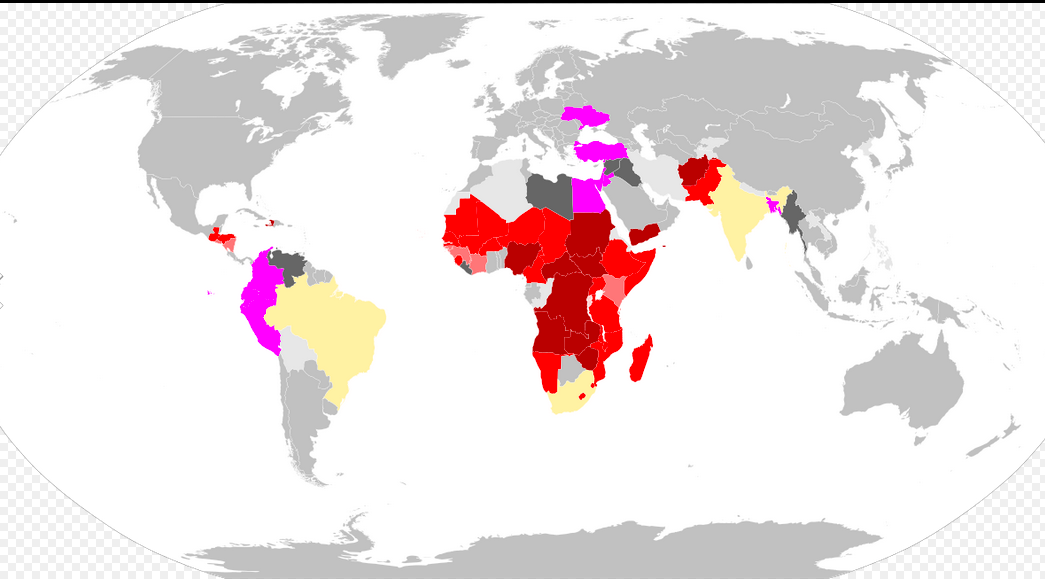 A talk delivered at the meeting “Food Futures in the Anthropocene” (University of Tasmania, November 7-10 (2020)). One of a number of talks and articles where I have been trying to bring people’s attention to the importance of interconnectedness between the many global challenges that we now face. I still haven’t had time to write this one up for publication, so here are my notes. Enjoy – and pass the word along!

The Future of Food: An Integrated Global Challenge (and a call for action)


The message of this talk is that there is no point in talking about food futures in isolation. The security of our future food supplies is just one of many catastrophic threats that we now face. Those threats are linked together in a complex network, and networks have their own ways of doing things. We need to find some way to deal with the network of threats as a whole. Just dealing with the threats on an individual piecemeal basis is a recipe for disaster.

The World Economic Forum has produced a map of how global threats connect with each other. One particularly strong link for food security is with climate change. It works in both directions, and in some unexpected ways. Global warming can produce longer growing seasons. This can mean higher productivity, and even multiple crops. But it also means that some pests can now over-winter, and produce damage much earlier in the following season. Increasing rains can also damage transport routes, especially in sub-Saharan Africa, which produces a disproportionate amount of the world’s food.

But food production can also affect climate change. In fact, if we get the fossil fuel problem under control, the food industry and food transport will become the biggest contributors to greenhouse gas emissions.

This network of problems is called a complex adaptive network. It is a network because the different parts are linked with each other and affect each other. It is adaptive because these interactions feed back on each other so that the system evolves and changes over time. And it is complex because the system as a whole then has emergent properties that are more than the sum of its parts.

That’s the killer, and that’s why we can’t just tackle these threats in isolation. My friend Andy Haldane, who is now the chief economist for the Bank of England, put it succinctly in a recent speech. He pointed out that “Complex systems exhibit tipping points, with small changes in parameter values capable of moving the [whole] system from stability to collapse … The radical uncertainty in such complex webs generates emergent behaviour which can be near-impossible to predict, model and estimate.”

This is what happened with the crash of the global financial system in 2008. It could just as easily happen with any network where food production forms a part.

One example that has been studied intensively is the effect of the deforestation of the Brazilian rain forest. We can wring our hands because of the obvious potential effects on climate change and biodiversity. But the deforestation provides land for soybean production, most of which goes to China. If that trade stopped, China would turn elsewhere.

“Elsewhere” in this case means sub-Saharan Africa, and this is where things start to get complicated. Land clearance for more agriculture at the edge of the Sahara produces dust that gets blown all the way to Brazil and the Caribbean. In Brazil it actually improves forest productivity. But in the Caribbean it contributes to the decline in coral reefs. This now affects China and Brazil, because both of them have invested heavily in Caribbean tourism. An unexpected knock-on effect of rainforest clearance.

So what can we do about it? If we follow the advice of Bill Barnacle in Norman Lindsay’s Magic Pudding, we would give way to despair. Before we do that, however, perhaps we could follow the example of his koala hero Bunyip Bluegum, and look for alternative solutions.

I’ve been working with Anders Sandberg from Oxford’s Future of Humanity Institute on the necessary conditions for the governance of global catastrophic risk. One clear conclusion is that the traditional approaches are no longer fit for purpose, because they are based on predictability and compartmentalization of responsibility.

But the behaviour of complex adaptive networks is often unpredictable, and the interconnections mean that it can’t be compartmentalized. It is pointless to have a Minister for Food Security, a different Minister for Transport, and yet another to deal with climate change when these and other areas form an integrated whole.

To deal with an integrated whole we need an integrated approach. This must serve the dual function of avoiding the circumstances that are most likely to lead to catastrophic change, and responding quickly when runaway systemic change does occur.

Such an integrated approach must “follow the science”, and it must ultimately come from government. That’s going to take time to achieve, if it can be achieved at all.

But in the meantime there is another chance. The science of evolution and change in complex adaptive systems has been studied extensively over the last two decades. What it has shown is that there are opportunities to work from the bottom up – from local to global, rather than the other way around. From us to government, rather than relying on government to us.

These opportunities mostly concern steering the system away from potential tipping points. I will talk briefly about just four of them: that’s maintaining diversity; transformative agriculture; rewilding; and changing our food habits.

The first opportunity is to introduce as much diversity as possible into our food production.

This measure has the support of the United Nations Food and Agriculture Organization. In their recent report on ‘How to manage biodiversity for food and agriculture,’ they point out that [biodiversity] increases resilience of agro-ecosystems and is as such a means for risk reduction and adaptation to climate change.’

The experimental evidence that underpins this statement is overwhelming. It is telling us that we should do more to support and maintain local, small-scale farming systems, where diversity is a characteristic feature. But there are two major barriers: globalization and the World Bank.

Globalization produces efficiencies of scale, but often locks food producers into an inflexible pattern that does not offer resilience when circumstances begin to shift and change. Small-holders make a significant contribution to food security in developing countries, but studies have shown that integration into the broader economic system increases their susceptibility to collective risks, especially those enunciated by the World Economic Forum.

The World Bank and the International Monetary Fund have made the situation even worse in some countries by forcing them to abandon their national goals of growing traditional crops to ensure food self-sufficiency, and instead switch to non-traditional cash crops for foreign markets, in order to generate money to pay off their international debt.

It is in all of our interests to work politically to change this policy, not just on moral grounds, but because preserving and promoting global agricultural diversity is essential to our future.

The second food-related opportunity that we have for steering the system away from potential tipping points lies in transformative agriculture. Australia has been very much in the lead.

The Aussie approach is exemplified by the work of Dr Charles Massy, an Australian farmer with a bachelor’s degree in zoology and a powerful interest in sustainability. It is grounded in changing the actions of individuals and small communities, aiming to catalyze large-scale change through small-scale innovation.

Charlie has set out almost single-handedly to change Australian farming practices from their present mechanical and chemical bases, to one that recognizes the dynamic biodiversity of the soil, vegetation and other landscape functional components. When I talked with him several years ago he had already enrolled some seventy Aussie farmers to act as key innovators.

Charlie even wrote a Ph.D. thesis on how he managed to change their minds, and change their practice. It should be required reading for anyone looking for social change. One key factor is to show by example that it can be done. Another is to provide a successful and trustworthy role model.

The third opportunity for avoiding tipping points comes through rewilding some of our most damaged areas. It illustrates many of the points that I have been making about connectivity and the often non-intuitive behaviour of networks.

A very recent Nature paper by Bernardo Strassburg and his colleagues looked at hotspots around the world that could benefit from rewilding – that is, from being returned to their so-called “natural” state. The most important areas lie in South America, sub-Saharan Africa and South-East Asia, but there are also opportunities in South-West and South-East Australia, especially with respect to biodiversity and the mitigation of climate change.

The most obvious overall benefit would be on biodiversity. Restoring just 15% of converted lands in priority areas could avoid around 60% of predicted species extinctions, including the extinction of essential insect pollinators.

A less obvious benefit would be the sequestering of carbon. The same degree of restoration could sequester 299 gigatonnes of carbon dioxide – that’s 30% of the total carbon dioxide increase since the industrial revolution.

Most interestingly, the rewilding need not be at the expense of agriculture. In fact, according to the authors of the Nature paper, strategies could be devised whereby increasing agricultural yields could spare land for restoration while actually increasing overall agricultural production.

The rewilding would have to be done carefully, with rewilded areas surrounded by protected areas. We are not just talking about planting more trees, but about wetlands, peatlands, grasslands and shrublands. The study focuses on land, but the oceans also offer vast opportunities. Ocean habitats such as seagrass, and estuarine species such as mangroves, help to promote biodiversity, and can also help to secure future food supplies through fisheries and through further carbon sequestering.

Finally, and linked to the above discussion, we need to consider changes in food habits. A change towards a more vegetable-based diet has been widely discussed, and would certainly help. It is also worth mentioning that the transport of food by air is the single greatest contributor (per weight of food) to greenhouse gases in the food chain. Perhaps it is time to change our approach.

But the biggest change of all would be to learn how to view and deal with global threats as an interconnected whole. Going local, promoting diversity, and cutting the nexus between financial support and food production would certainly help to make our food systems more place-based and just. Perhaps, with time, they may even become more convivial.