The awesome power of multicrastination 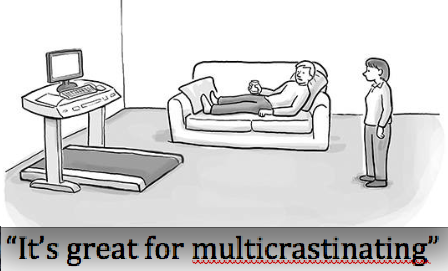 Stanford philosopher John Perry was awarded a spoof IgNobel Prize for his theory of “structured procrastination.” It took the organizers fifteen years to get round to awarding him the prize, but finally happened in 2011.

Now I am getting around to writing about. Perry’s idea is that we can use procrastination to get things done. All we need to do is to draw up a list of jobs in priority order, with the job at the top being one that seems terribly urgent, but actually isn’t. Most procrastinators will then actively pursue the other jobs as a way of avoiding the one at the top. Job(s) done. I think I may have discovered an interesting variant on Perry’s original idea.

Perry’s original essay, published in 1996, now forms the anchor for his website (appropriately called www.structuredprocrastination.com). He admitted that there was a potential flaw with his idea, in that the job at the top never gets done, at least until a more important-seeming job comes along. So one answer is to search out such a job and put it at the top of the list. Another is to carefully choose the original top job as one that can be put off without damage.

To use Perry’s method effectively, you need to be the right sort of procrastinator. Psychologists Angela Chu and Jin Choi (“Rethinking Procrastination: Positive Effects of “Active” Procrastination Behavior on Attitudes and Performance” The Journal of Social Psychology Vol. 145 (2005), 245 – 264) distinguish between two types – passive and active. Passive procrastinators are paralysed by their indecision and fail to complete tasks on time, or indeed at all. Active procrastinators, on the other hand (including myself), put jobs off until the pressure of a deadline is upon them because they find it more fruitful to work under pressure.

Perry’s method is designed for active procrastinators. But what sort of job should we put off? Perry suggests that we should put off the most important-seeming one. My own idea is to put off the one that looks as though it is going to be the most fun.

My reasoning is that, if I start off doing the fun job, I will feel guilty about all the others that I should be doing. By putting it off I assuage the feeling of guilt, get the other jobs done, and have a reward waiting for me after I have done them.

Better still would be to put off many jobs, and have many rewards waiting for me. This would be an even more efficient form of procrastination – multicrastination, perhaps? Regular readers will have noted that I sometimes do this with my promised posts. But that’s only because I’m trying to be efficient.