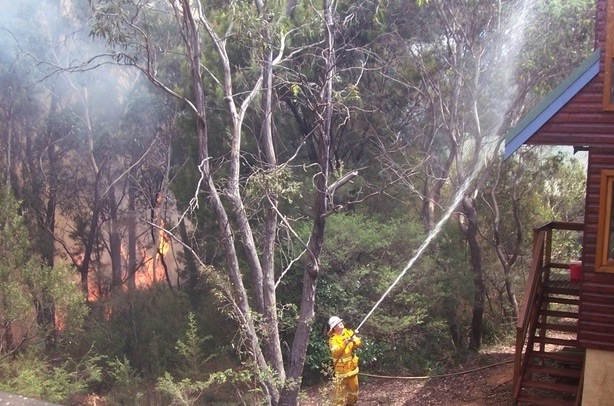 The natural environment is a web of connected systems. Change one element and you impact on other elements. The human impact on earth systems is becoming increasingly obvious. In my latest programme for Australian ABC Radio National’s Science Show (https://www.abc.net.au/radionational/programs/scienceshow/self-interest-preventing-progress-on-world-problems/11708812), I reflect on the big challenges that we face, including catastrophic fire risk in Australia’s Blue Mountains where I live. Protection of our property included hazard reduction. But how can we perform hazard reduction when it comes to wider global issues like climate change and loss of biodiversity? I argue that politics and our obsession with profit and self-interest are preventing us from making any real progress, and that we now need a huge change of mindset.

You can listen to the podcast by clicking on the link above. Below is the full transcript:

The Rural Fire service came to our place in the Blue Mountains recently, to perform a hazard reduction in advance of the bushfire season. It set me thinking, not for the first time, on how we could do with equivalent hazard reduction procedures in the wider world.

The firies busied themselves with removing inflammable scrub and clearing a zone around the house. It sounds simple, but it’s not so simple. One underlying problem is that we have chosen to live right next to a fire-prone National Park. Another problem is that many others have done the same, so that the resources of the fire service in an emergency are stretched thin.

We think that the risk is worth it, and we have done our best to minimize the danger. When it comes to global threats, though, this sort of argument doesn’t even hold as much water as the tank under our verandah. We need an entirely different way of thinking if we are to survive the perils that loom. We need to be thinking about our world system as a whole, rather than focussing on individual risks.

Some of the major perils have been outlined in a recent series of reports by various United Nations sponsored panels. They include climate change, loss of biodiversity, the effects of changing land use, and sea level rise, among others.

To deal with such threats, we need to realize how tightly interconnected they are. Changing land use, for example, can affect biodiversity. Loss of biodiversity can affect species pollination. Consequent changes in plant growth patterns can impact on greenhouse gas emissions, and hence on sea level rise. Changing atmospheric gas concentrations can also influence ocean acidity, and hence coral reefs and fish populations. With loss of fisheries, we are back in the loop of needing to change land use to provide enough food. And so on it goes.

We also need to realize just how difficult it can be to predict the behaviour of such complex webs. Take case of South Africa’s Kruger National Park.

Well-meaning planners erected a boundary fence to protect the park’s herbivorous wildlife from marauding predators. The unintended consequence was that the fence stopped the animals from moving outside to find water during dry seasons. So the planners dug dams and extra water holes within the park. But then the animals crowded around these water holes, the spread of parasites and infectious diseases became more likely, and some 30% of the large herbivores were wiped out during the first dry season.

The planners had unintentionally replaced one hazard with another. To their credit, they switched their thinking from planning to adapting. They breached dams, removed water holes, and monitored and responded rapidly to the results so as to avoid critical thresholds.

Andy Haldane, chief economist for the Bank of England, put the problem succinctly in a recent speech: “Complex [interconnected] systems exhibit tipping points,” he said “with small changes capable of moving the [whole] system from stability to collapse. The radical uncertainty in such complex webs generates emergent behaviour which can be near-impossible to predict, model and estimate.”

Andy was talking about the financial system, but his comments apply to all of our fragile world systems. His answer was that “complex environments … call for simple decision rules. That is because these rules are more robust to ignorance.”

In the case of globally networked global threats, our world is unfortunately not packed and ready to run. Sudden change can be upon us before we know it. We cannot necessarily tell where and how the change will occur. Sometimes, as in the case of global warming, we can see the train coming, but we still cannot predict what might happen after it hits the buffers at high speed. Perhaps we can change the points to avert the catastrophe, but we also need to be ready to cope with the aftermath of the crash.

The plain fact is that current political systems, of whatever persuasion, are simply not fit for purpose. They focus mostly on the short term, and are largely driven by dogma. The aim is to control, rather than also be ready to respond in a flexible manner to changing situations, even if the necessary response does not fit the dogma. One example is Australia’s shocking failure, along with the United States, to contribute to the United Nations’ Green Climate Fund.

We do need control and planning if we are to be able to get on with our lives in some comfort and security. But we also need the ability to respond and adapt. Scientists now know that all complex adaptive systems, including our increasingly interconnected world, will inevitably undergo sudden, dramatic, system-wide changes at some point.

Intergovernmental panels are increasingly pointing out that, to respond and adapt, we need to move away from our current focus on the pursuit of profit and self-interest. If we are to have a sustainable future, we need to transform our social and economic thinking towards cooperation and community support for each other. We have it in the Blue Mountains when it comes to responding to sudden fires. We need it throughout the world, if we are to avoid or adapt to the dramatic changes that are even now on their way.