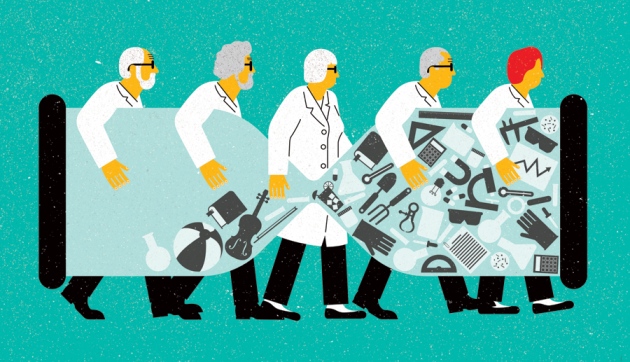 Scientists are often seen as having a sardonic attitude towards ordinary mortals. Seeking an origin for the word “sardonic”, I came across this from Vladimir Propp’s “Theory and History of Folklore” (http://books.google.co.uk/books/about/Theory_and_History_of_Folklore.html?id=RxkNAQAAIAAJ):

Among the very ancient people of Sardinia, who were called Sardi or Sardoni, it was customary to kill old people. While killing their old people, the Sardi laughed loudly. This is the origin of notorious sardonic laughter …  now meaning cruel, malicious laughter. [But the original meaning was rather] different. Laughter accompanies the passage from death to life; it creates life and accompanies birth. Consequently, laughter accompanying killing transforms death into a new birth, nullifies murder as such, and is an act of piety that transforms death into a new life.

With calls for older scientists to retire to make way for a new generation (http://www.nature.com/news/the-retirement-debate-stay-at-the-bench-or-make-way-for-the-next-generation-1.17487), maybe the Sardi approach could provide an answer. It would certainly give the younger generation a good laugh.