My letter in “Nature”: How music inspired Newton’s rainbow 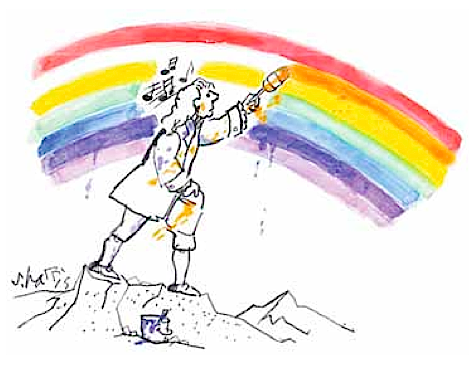 Very pleased that my letter “Music inspired Newton’s rainbow” has now been published online in Nature Vol 250 (http://www.nature.com/nature/journal/v520/n7548/pdf/520436a.pdf). Even more pleasingly, Nature chose to illustrate my letter with the cartoon above, and cartoonist Sidney Harris (highly recommended; see ScienceCartoonsPlus.com) has kindly permitted me to use it here and on Twitter. Thanks, Sidney!

In fact, Newton did not himself “see” the colours, but relied on his assistant, whom he said had much better vision than himself. The background, though, is that Newton believed that the rainbow should have seven colours, because his view of the harmony of nature required that the colours should be “divided after the manner of a Musical Chord” (Opticks p.127). When his assistant claimed to see the extra colours, Newton grabbed on to this willingly. As I say in the Nature letter (which cannot be reproduced in full here for copyright reasons) “It gives the lie to the old saying that artists see what they believe, but scientists believe what they see.”