93. Kurt Gödel and the hole in the U.S. constitution 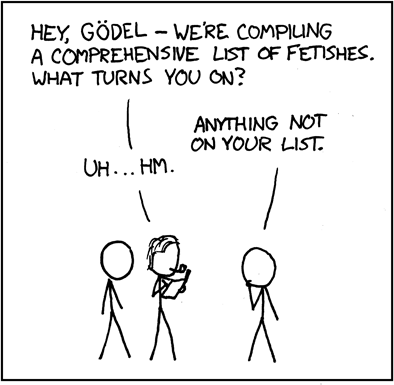 In mathematics, he took the final step in a long line of upsetters of apple carts that stretched right back to Euclid, who came up with the first systematic treatment of geometry based on making deductions from a small set of axioms. Then in the nineteenth century mathematicians like Lobachevsky and Riemann proved that you didn’t need one of the axioms (the one that says that parallel lines never meet), and that you could construct perfectly self-consistent geometries where parallel lines do meet. Then in 1900 the German logician Gottlob Frege tried to derive the whole of mathematics from logic, only to be confronted with a paradox devised by Bertrand Russell that undermined his whole logical edifice just as it was about to be published. Russell eventually resolved the paradox and produced (with Whitehead) his own derivation of mathematics from logic on the form of the giant three-volume Principia Mathematica, published between 1910 and 1913. Then, in 1931, along came Kurt Gödel, who proved that it couldn’t be done. In any logical system based on a set of axioms, he showed, there will be some correct theorems that can’t be proved, and some incorrect ones that can’t be disproved (see Douglas Hofstader’s wonderful Gödel, Escher, Bach for a guided tour of how Gödel did it).

After the Second World War Gödel decided to apply for U.S. citizenship, with Einstein as one of his sponsors.

This is where the fun started. As part of his preparation for his citizenship examination, Gödel decided to apply to the United States constitution the same rigorous logic with which he had undermined mathematics. He found to his horror just what the economist Kenneth Arrow later proved – that the constitution fulfilled most of the requirements for democratic fairness, but that it actually allowed under some circumstances for the election of a dictator.

Gödel was already suffering from the paranoia that would plague his later life, and he really couldn’t let this pass. During his examination, the judge asked him if he thought that a Nazi regime like the one from which he had escaped could happen in the United States. Gödel excitedly began to expound his discovery, and to criticize the whole logical formulation of the Constitution, much to the concern Einstein. Luckily, the judge was a man of sense, and cut Gödel off before he could dig too deep a pit for himself.

So far as I know, that inconsistency in the U.S. constitution is still there. According to Arrow’s Theorem, it has to be, unless it is removed and replaced by a different glitch. For more on this theorem, check out my radio broadcast “Fair Enough?” (http://www.abc.net.au/radionational/programs/ockhamsrazor/fair-enough3f/5581734)