IgNobel or Nobel – which has more value? 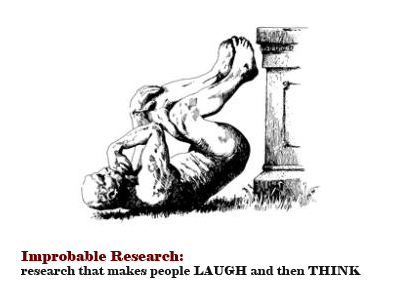 It may sound ridiculous to argue that a spoof IgNobel Prize could ever have more value than an actual Nobel. Of course, when it comes to real science, the Nobels are still the pinnacle. But perhaps, as I pointed out in this interview on the BBC World Service recorded on Sep 23, 2016, the IgNobels are actually more valuable when it comes to attracting attention to science and making it more accessible.

Here is the interview (all 3 minutes of it):

ADDITIONAL NOTE: The above thoughts were sparked during the interview itself, but what worries me is not so much the impact of the IgNobels (where, from my point of view as a science communicator, the pluses and minuses pretty well balance out) as the lack of impact of the real Nobel Prizes. These were originally meant to free up the recipients from other duties so that they could concentrate on research, but their effects are usually far from this, with most prizes going to people towards the end of their research careers (almost unavoidably, since the value of the discovery has had to have time to become apparent before the prize is awarded), and who don’t need the support, since their reputations are such that grant money flows towards them quite freely.

So do the Nobels actually have any value to science and the community? If they do in this present era, I would suggest that it is through attracting attention to science and evoking community support for what scientists do. But, so far as I can see, this isn’t happening. What we can we do to change it? That must be the subject for a future post, and hopefully some reader input.