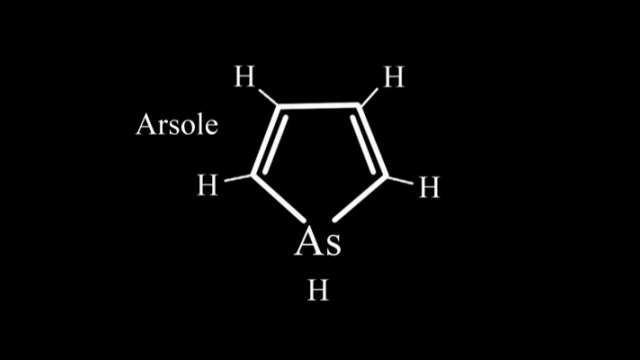 I have twelve minutes to convince you that scientists have a sense of humour, and that humour is an important contributor and stimulant for science.

It should only take one minute, because I need take you no further than a paper published by two American theoretical chemists in the highly respectable Journal of the American Chemical Society in 1976. The pair were investigating a quantum mechanical property called aromaticity, in a series of phosphorus compounds and their arsenic equivalents. The phosphorus compounds were called phospholes, and the arsenic compounds had an analogous name. You can probably see it coming: their paper appeared with the highly memorable title “On the Aromaticity of Phospholes and Arsoles.”

The real point of this story is that the researchers only tackled this problem, and made what turned out to be an original and interesting discovery, because of the mouth-watering prospect of publishing a paper with this title. Humour was the stimulus as well as the result. I often wonder whether Fred Hoyle had a similar motivation when he set out to investigate the synthesis of deuterons in the early solar system. He published his results in a paper whose title was calculated to upset the religious fundamentalists of his day as much as possible by representing the synthesis of deuterons with the single word title “Deuteronomy” (http://scitation.aip.org/content/aapt/journal/ajp/29/7/10.1119/1.1938259).

The connection between humour and science is more than a matter of funny, punny titles, though. At its heart is the fact that humour and scientific discovery are both largely based on establishing unexpected connections. Arthur Koestler analyzed the process in his book “The Act of Creation.” He drew a strong parallel between “seeing the joke” and “solving the problem.” Isaac Asimov put it succinctly when he said that “The most exciting phrase to hear in science, the one that heralds new discoveries, is not ‘Eureka’ but ‘that’s funny …’ ”

Richard Feynman won a Nobel prize because he thought something was funny. As he described it “I was in the cafeteria and some guy, fooling around, throws a plate in the air. As the plate went up in the air I saw it wobble, and I noticed the red medallion of Cornell on the plate going around. It was pretty obvious to me that the medallion went around faster than the wobbling. I had nothing to do, so I start figuring out the motion of the rotating plate. … … Then I thought about how the electron orbits start to move in relativity. … … And before I knew it… the whole business that I got the Nobel prize for came from that piddling around with the wobbling plate.”

My Bristol colleague Michael Berry earned himself a spoof IgNobel prize under rather similar circumstances when he spotted a toy frog in a shop window, levitated magnetically and slowly rotating in a stable position in mid-air. Michael realized that this was impossible according to classical physics, and that the frog should sooner or later fall to one side. But it didn’t. Michael worked out the reason why, making a fundamental new contribution to physics in the process, and also worked out from that physics that it should be possible to make a real live frog levitate in a strong enough magnetic field. The results of his efforts were one very surprised-looking frog, and an IgNobel prize that he shared with the experimental physicist Andre Geim, and which he probably should have shared with the frog.

The idea of the IgNobel prizes is that “first they make you laugh; then they make you think.” They focus on the quirky and the unusual, which is just what scientists did in the seventeenth century when unusual natural phenomena were thought of as “jokes of nature,” and where the job of natural scientists was to try and understand the joke.

Clubs were even formed for this express purpose. One of them was called the The Virtuosoes Club. Its chief aims, according to the committee notes, were “to promote new whims … … and to promote useless as well as useful experiments.”

The club met every Thursday at a tavern in Cornhill, which is a street in central London that these days is given over to opticians and makers of optical instruments, and which is also the site of the world’s first underground public toilet. The toilet wasn’t there in the days of the Virtuoso’s Club, but microscopes and other optical instruments abounded as they attempted to understand the appearance of faces, crucifixes and other strange patterns in rocks and boulders. Many people attached great significance to these patterns, but the experimenters who attempted to reproduce such “jokes of nature” in the laboratory soon found that they could be mimicked by crystal growth, or could otherwise be understood as meaningless artifacts.

It must have all been great fun, which is just what science should be, although it mast also have been rather galling when a solitary Dane called Nicholas Steno published the first book in which he clearly distinguished between such fortuitous patterns and the patterns of fossils that were the remains of living organisms. The downside of humour in science showed itself here when a series of hoaxes slowed the acceptance of this distinction among English scientists, and also destroyed the career of at least one continental scientist, who was so taken in by the hoaxes that he published a book full of them, and then spent the rest of his life and most of his income trying to buy back after he realized that he had been fooled.

Some hoaxes, though, have led to genuine scientific advances. One was perpetrated by British scientist R.V. Jones during the Second World War, when he managed to convince German intelligence that the British were using infrared radiation to detect submarines. The Germans fell for it, and developed a painting scheme that combined a black undercoat with a top layer of varnish that included powdered glass. The properties of the undercoat, glass and varnish were such that infrared passed straight through and was absorbed by the undercoat while visible light was refracted by the glass and gave a grey appearance. To the naked eye the boat looked grey, like the grey north Atlantic, but to an infrared viewer it looked dark, again like the sea when viewed in infrared light.

It was a brilliant invention, stimulated by a joke, and the forerunner of modern “invisibility cloaks.” Unfortunately for the Germans, it didn’t work, because the British were actually using radar, which operates at much longer wavelengths than infrared.
Arthur Koestler said that comic discovery is “paradox stated” while scientific discovery is “paradox resolved.” Nowhere is this more apparent than in the modern hoax of crop circles, which were first recorded in British wheatfields in the mid-seventeenth century, and whose frequency grew explosively in the mid-1970s after an artist called Douglas Bower and his friend David Chorley decided to start faking them to create a UFO hoax. Others soon followed, and scientists started to look for rational explanations.

One who looked hardest was the Canadian meteorologist Terence Meaden. Fooled by the hoax, he suggested that the curvature of hillsides in southern England affected the local airflow, producing whirlwinds that could stabilize their positions long enough to produce defined circles in crop fields.

Meaden’s theory led to an improved classification scheme for whirlwind phenomena, but its application to crop circles proved less than useful when Bower and Chorley confessed their hoax in 1999. By this time other hoaxers had got into the act, though, and there were other phenomena to explain. One of these was the fact the series of joints along the wheat stalk – they are called pulvini – were swollen in the bent-over stalks. The most likely cause – wait for it – was superheating from electromagnetic radiation. This put UFOs right back on the agenda!

It also introduced microwave ovens, because the same effect can be produced by holding a battery-powered magnetron from a microwave oven 4 meters above the circle centre. This observation has led to a new technology, called Molecular Impulse Response technology, which accelerates crop growth by applying electrical pulses – yet another case where a joke has led to a significant scientific advance.

Scientific hoaxes and jokes are with us to stay. It is up to us to take advantage of them. My friend Tony Blake, a flavour chemist who worked in Switzerland, took full advantage when he was giving a talk about the human sensory system, and how it is adapted to detect change rather than static states. He gave the flashing lighthouse as an example, and someone in the audience joked that he should develop flashing flavours as well. So he did! They are now available commercially in a range of sweets that release bursts of flavour as you chew. A similar logic underlies the design of the pulsed air fresheners that we see so frequently advertised on television. I suppose you could call it pulsed advertising.

We should really let Galileo have the last word, because he pulled off the ultimate scientific joke when the church authorities asked him in all seriousness to calculate the dimensions of the roof of Hell, as described in Dante’s inferno. With his tongue planted firmly in his cheek, Galileo solemnly did as he was asked, and presented his results to the Florentine Academy with as straight a face as we might see on any of today’s stage comedians. He was rewarded with his first academic post, but the joke doesn’t end there. Once he had got the job, he realized that his calculations had actually been wrong, and that the roof as he designed it would have collapsed under its own weight, burying all those sinners with it. He spent the rest of his life trying to figure out the correct calculations, but only got the chance to write them up and publish them when he was put under house arrest by the church authorities for his heretical opinions towards the end of his life.

By taking a ridiculous suggestion seriously, Galileo laid the foundations for modern engineering practice. Engineers still use his revised calculations as a rule of thumb when designing load-bearing structures. Galileo and his sense of humour should be an example to us all.