How To Eat Your Mummy 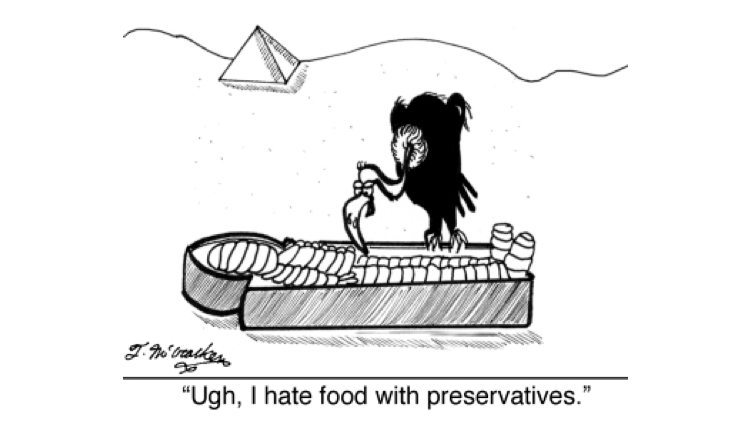 I am a regular speaker at the annual Oxford Symposium on Food and Cookery, where famous food writers, food historians, and other food enthusiasts share their ideas and experiences in the cloistered dignity of St. Catherine’s College, Oxford. Well, it would be cloistered if it was one of the older colleges, but St. Catz is actually a modern college, and lacks such picturesque features. Dignity was also notably lacking from its main lecture hall in the year when I decided to dress up as an Egyptian mummy, in order to show how people used to disinter and eat them.

Don’t laugh; this is serious. In mediaeval times, and even up to the end of the nineteenth century, the carefully preserved corpses of Egyptian nobility were dug up in their thousands, ground in to small pieces, and consumed as mummia. Shakespeare even mentions the practice in Othello when Othello gives to his beloved Desdemona a handkerchief “dyed in mummy, which the skilful/Conserved of maiden’s hearts.”

The equivalent today would be to soak a handkerchief in Viagra, because that was how mummia was thought to act. But there was a lot more to it than that. Mummia was the superfood of its day. Just as almonds, black beans, watermelon, and a host of other “natural” foods are believed to have “age-defying, disease-fighting, fat-blasting superpowers,” so mummia was believed to have a similarly literally incredible range of benefits. Mediaeval noblemen carried tiny bags of mummy powder tucked into their clothing, and François I of France always rode with a leather pouch of it attached to his horse. Its supposed health benefits included its curing battlefield and other injuries, overcoming difficulties in childbirth, restoring wasted limbs, and even stopping nosebleeds.

The problem lay in eating the stuff. Gooey, black and messy, it must have been hard to get down, and there were many recipes to make it more palatable. One of the simplest was to suspend the ground up mummia in spirits of wine. I tested its appeal on the audience by suspending some sugar, blackened with a food dye, in white wine and offering it to members of the audience as though it were real mummia. Many people recoiled, and one actually squealed “Oh, no, I couldn’t. I’m a vegetarian!”

Which just goes to show how much of our appreciation of food and drink is in the mind.