How Does a Scientist Boil an Egg? 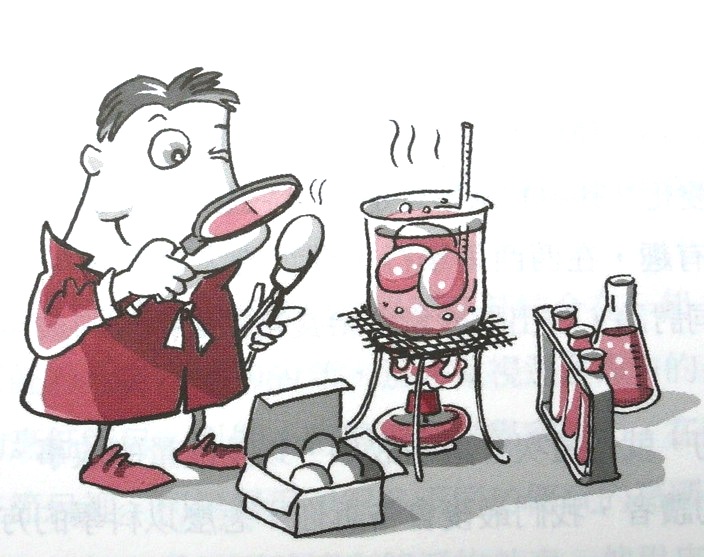 A scientist boils an egg in the same way that James Bond did in “From Russia With Love“. Bond demanded that his eggs should be boiled for exactly three and one-third minutes, which is just the time that comes out of the scientific equation for egg boiling:

This equation, devised by Dr. Charles Williams of Exeter University, shows that Bond must have preferred small eggs weighing around 45 grammes. If he had preferred larger eggs, they would have taken longer to boil. A typical supermarket egg with a weight of 65 grammes would take around four and a quarter minutes to boil according to this equation.

Scientifically-minded chefs have come up with all sorts of tricks to produce the perfect soft-boiled egg. All of them rely on raising the temperature of the egg white above its setting temperature of 63°C, while keeping the yolk below its setting temperature of 66°C. The most dramatic approach is that of the famous American chef Fritz Blank, who uses crushed ice! Fritz boils his eggs for just two minutes, which puts enough heat into the egg to complete the cooking process if the egg is left for a further ten minutes. During this time he rolls the egg in crushed ice so that the white doesn’t overheat and become leathery, and so that some of the heat is drawn to the outside of the egg instead of going to overcook the yolk. He also claims that his method avoids the unappetizing grey layer that sometimes appears between the white and the yolk.

Just one final tip – never use eggs straight from the fridge. If they are cold, put them in hot (not boiling) water for a couple of minutes first, as recommended by Michelin 3-star chef Heston Blumenthal. That way, you can be a top chef yourself – at least when it comes to boiling eggs.