Game theory and our future: The Glugs of Gosh 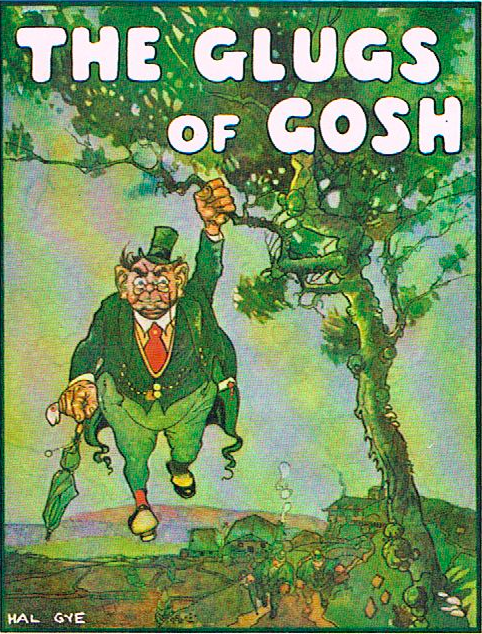 Few people outside Australia will have heard of the Australian poet C.J. Dennis, creator of that wonderful rough diamond “The Sentimental Bloke”. But Clarence Michael James Stanislaus Dennis wrote one of the great social parodies in his set of poems “The Glugs of Gosh,” and brilliantly anticipated the paradoxes of modern game theory in two of them: the savage, thought-provoking anti-war satires “The Stones of Gosh” and “Ogs.”

I have argued that a copy should adorn the walls of every legislature in the world, as a permanent reminder of human greed and stupidity, and the folly that we indulge in whenever we try to get the better of our neighbours in commerce or in war. Stick with it; you will be amply rewarded by the punchline:

The Stones of Gosh

Now, here is a tale of the Glugs of Gosh,

And a wonderful tale I ween,

Of the Glugs of Gosh and their great King Splosh,

And Tush, his virtuous Queen.

And here is a tale of the crafty Ogs,

In their neighbouring land of Podge;

Of their sayings and doings and plottings and brewings,

And something about Sir Stodge.

That was the Knight, Sir Stodge.

Oh, the King was rich, and the Queen was fair,

And they made a very respectable pair.

And whenever a Glug in that peaceful land,

Did anything no one could understand,

The Knight, Sir Stodge, he looked in a book,

And charged that Glug with a crime called Crook.

And the great Judge Fudge, who wore for a hat

The sacred skin of a tortoiseshell cat,

He fined that Glug for his action rash,

And frequently asked a deposit in cash.

Then every Glug, he went home to his rest

With his head in a bag and his toes to the West;

For they knew it was best,

Since their grandpas slept with their toes to the West.

But all of the tale that is so far told

Has nothing whatever to do

With the Ogs of Podge, and their crafty dodge,

And the trade in pickles and glue.

To trade with the Glugs came the Ogs to Gosh,

And they said in seductive tones,

“We’ll sell you pianers and pickels and spanners

For seventeen shiploads of stones:

All we ask is stones.”

That is awfully cheap to the things I buy!

For that grocer of ours in the light brown hat

But a Glug stood up with a wart on his nose,

And cried, “Your Majesties! Ogs is foes!”

But the Glugs cried, “Peace! Will you hold your jaw!

How did our grandpas fashion the law?”

Said the Knight, Sir Stodge, as he opened his Book,

So they fined the Glug with the wart on his nose

For wearing a wart with his everyday clothes.

And the goods were brought home thro’ a Glug named Ghones;

And the Ogs went home with their loads of stones,

Which they landed with glee in the land of Podge.

Do you notice the dodge?

Not yet did the Glugs, nor the Knight, Sir Stodge.

In the following Summer the Ogs came back

With a cargo of eight-day clocks,

And hand-painted screens, and sewing machines,

And mangles, and scissors, and socks.

And they said, “For these excellent things we bring

We are ready to take more stones;

And in bricks or road-metal

For goods you will settle

Indented by your Mister Ghones.”

That curtain! What a bee-ootiful blue!”

But a Glug stood up with some very large ears,

And said, “There is more in this thing than appears!

And we ought to be taxing those goods of the Ogs,

Or our industries soon will be gone to the dogs.”

And the King said, “Bosh! You’re un-Gluggish and rude!”

And the Queen said, “What an absurd attitude!”

Then the Glugs cried, “Down with political quacks!

How did our grandpas look at a tax?”

So the Knight, Sir Stodge, he opened his Book.

Then they fined the Glug with the prominent ears

For being old-fashioned by several years;

And the Ogs went home with the stones, full-steam.

Did you notice the scheme?

Nor yet did the Glugs in their dreamiest dreams.

Then every month to the land of the Gosh

The Ogs, they continued to come,

With buttons and hooks, and medical books,

And rotary engines, and rum,

Hair tonic and fiddles and ‘phones;

And the Glugs, while copncealing their joy in the dealing,

Paid promptly in nothing but stones.

Why, it was screamingly

Asking for nothing but stones!

Our drawing-room now is a heavenly show

Of large overmantels, and whatnots, and chairs,

And a statue of Splosh at the head of the stairs!”

But a Glug stood up with a cast in his eye,

And he said, “Far too many baubles we buy;

With all the Gosh factories closing their doors,

And importers’ warehouses lining our shores.”

But the Glugs cried, “Down with such meddlesome fools!

What did our grandpas lay down in their rules?”

And the Knight, Sir Stodge, he opened his Book:

“To Cheapness,” he said, “was the road they took.”

Then every Glug who was not too fat

Turned seventeen handsprings, and jumped on his hat.

They fined the Glug with the cast in his eye

For looking both ways–which he did not deny–

And for having no visible precedent, which

Is a crime in the poor and a fault in the rich.

So the Glugs continued, with greed and glee,

To buy cheap clothing, and pills, and tea;

Till every Glug in the land of Gosh

Owned three clean shirts and a fourth in the wash.

But they all grew idle, and fond of ease,

And easy to swindle, and hard to please;

And the voice of Joi was a lonely voice,

When he railed at Gosh for its foolish choice.

But the great King grinned, and the good Queen gushed,

As the goods of the Ogs were madly rushed.

And the Knight, Sir Stodge, with a wave of his hand,

Declared it a happy and prosperous land.

It chanced one day, in the middle of May,

There came to the great King Splosh

A policeman, who said, while scratching his head,

“There isn’t a stone in Gosh

To throw at a dog; for the crafty Og,

Last Saturday week, at one,

Took our last blue-metal, in order to settle

Weird; but we have the gun.”

And the King said, “Well, we are stony-broke.”

But the Queen could not see it was much of a joke.

And she said, “If the metal is all used up,

Pray what of the costume I want for the Cup?

It all seems so dreadfully simple to me.

The stones? Why, import them from over the sea.”

But a Glug stood up with a mole on his chin,

And said, with a most diabolical grin,

“Your Majesties, down in the country of Podge,

A spy has discovered a very ‘cute dodge.

And the Ogs are determined to wage a war

On Gosh, next Friday, at half-past four.”

Then the Glugs all cried, in a terrible fright,

“How did our grandfathers manage a fight?”

Then the Knight, Sir Stodge, he opened his Book,

And he read, “Some very large stones they took,

And flung at the foe, with exceeding force;

Which was very effective, tho’ rude, of course.”

And lo, with sorrowful wails and moans,

The Glugs cried, “Where, Oh, where are the stones?”

And some rushed North, and a few ran West;

And they gathered the pillows and cushions and rugs

From the homes of the rich and middle-class Glugs.

And a hasty message they managed to send

Craving the loan of some bricks from a friend.

On the Friday, exactly at half-past four,

Came the Ogs with triumphant glee.

And the first of their stones hit poor Mister Ghones,

The captain of industry.

Then a pebble of Podge took the Knight, Sir Stodge,

In the curve of his convex vest.

He solemnly sank to rest.

Yet, he was sent to rest.

My bee-ootiful drawing-room! What shall I do?”

But the warlike Ogs, they hurled great rocks

Thro’ the works of the wonderful eight-day clocks

They had sold to the Glugs but a month before–

Which was very absurd; but, of course, ’twas war.

And the Glugs cried, “What would our grandfathers do

If they hadn’t the stones that they one time threw?”

But the Knight, Sir Stodge, and his mystic Book

Oblivious slept in a grave-yard nook.

Then a Glug stood out with a pot in his hand,

As the King was bewailing the fate of his land,

And he said, “If these Ogs you desire to retard,

Then hit them quite frequent with anything hard.”

So the Glugs seized anvils, and editors’ chairs,

And smote the Ogs with them unawares;

And bottles of pickles, and clocks they threw,

And books of poems, and gherkins, and glue,

Which they’d bought with the stones–as, of course, you know–

From the Ogs but a couple of months ago.

Which was simply inane, when you reason it o’er;

And uneconomic, but then, it was war.

When they’d fought for a night and the most of a day,

The Ogs threw the last of their metal away.

Then they went back to Podge, well content with their fun,

And, with much satisfaction, declared they had won.

And the King of the Glugs gazed around on his land,

And saw nothing but stones strewn on every hand:

And stones on the house-tops and under the feet.

And he said, with a desperate look on his face,

“There is nothing so ghastly as stones out of place.

And, no doubt, this Og scheme was a very smart dodge.

But whom does it profit–my people, or Podge?”