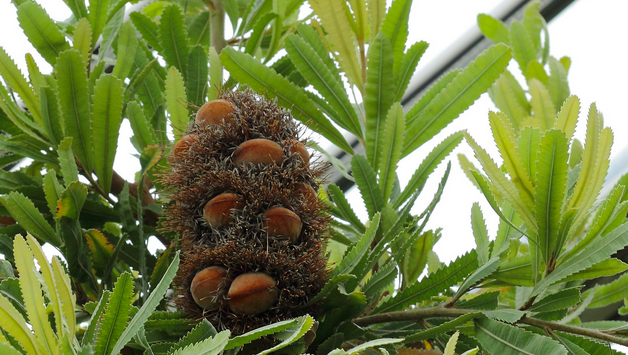 My home village of Blackheath in Australia’s beautiful Blue Mountains boasts many beautiful gardens, none more beautiful than the fifty year-old rhododendron gardens, maintained by an enthusiastic group of volunteers who are mostly older than the gardens themselves. They wanted me to give them a talk. But what on earth could I talk about. It needed to be something linked to the gardens, but I know nothing about rhododendrons, or about gardening for that matter.

But, as a Fellow of London’s Linnean Society, I do know something about the naming of plants. The society is named after  the Swede Carl Linnaeus, who invented the system of binomial nomenclature that we still use. Banksia serrata, for example, is a species of banksia that we have growing in our garden, and indeed there are many specimens in the bushland borders of the rhododendron gardens themselves. The banksia genus is named after Joseph Banks, the amateur botanist who accompanied James Cook in his 1770 journey of exploration that resulted in the “discovery” and annexation of mainland Australia.

I discovered a fascinating connection between Linnaeus and Banks that served as the basis for my talk. The connection was sex – not the sort that Banks was wont to indulge in when Cook landed in Tahiti, but the sex of flowers. Linneaus received many thousands of specimens from an army of collectors around the world. To help them categorize them, Linnaeus invented a mnemonic system based on the numbers of pistils (female) and anthers (male). The mnemonic was based on human sexual relationships. One of each was a “normal” relationship. But with an increase in numbers, polygamy, polyandry, homosexuality, and other relationships that were “unnatural” in th eyes of the time came into play.

It was all too much for respectable English society, but Joseph Banks was on hand. As President of the Royal Society, and confidant of the king, Banks had considerable influence. He used it to push Linnaeus’s credentials and methods, and also to encourage a wealthy young contemporary to purchase Linnaeus’s huge collection of specimens after he died and bring it back to England, where it now forms the core of the Linnaean Society collection.

There is no truth in the story that the king of Sweden sent a warship in pursuit when he found that the collection was leaving Sweden, but Swedish scientists were certainly angry that the king had not prevented the sale. Among the collection’s treasures are five rhododendron type specimens (the first to have been seen outside China). Two of these species are growing in the rhododendron gardens, providing a nice closing of the circle to a talk that went down very well with a packed audience.

1) The Linnean Society is the world’s oldest active society devoted to natural history. It has played host or sponsor to many significant events, none more so than the dual presentation of Charles Darwin and Alfred Russell Wallace’s theory of evolution. It is not the fault of the society that the President of the time, reflecting on the events of the year (1858) recorded the opinion that nothing of particular biological significance had happened.

2) I can thoroughly recommend Patricia Fara’s Sex, Botany and Empire for a detailed and entertaining description of the relationship between Banks and Linnaeus.