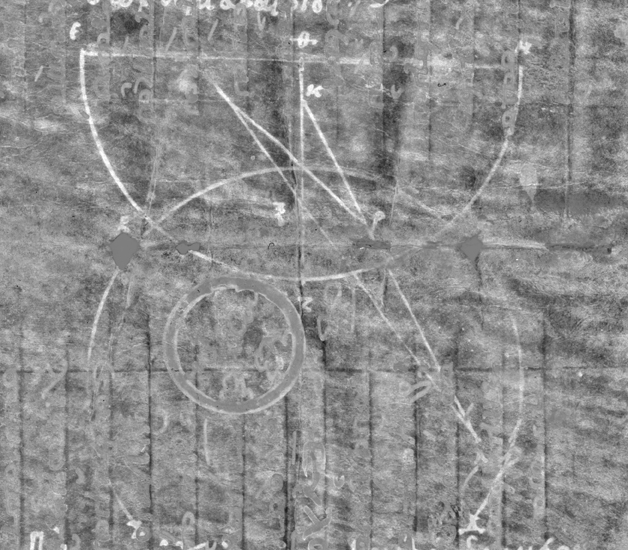 With the news that synchrotron X-radiation is being used to shed light on fading Modernist paintings (http://physicsworld.com/cws/article/news/2015/jul/08/x-ray-analysis-sheds-light-on-fading-modernist-paintings#.VZ-GYYqngQY.twitter), it occurs to me that my followers might be interested in my now-prescient 2005 article on a rather older, and still on-going application …

Pre-mediaeval writers had a hard time of it. It wasn’t that there was nothing exciting to write about – the problem was finding something durable to write it on. The best material was parchment made from animal skins, which was chosen by a tenth-century Constantinople scribe when he copied a seminal work by the ancient Greek mathematician Archimedes entitled “Methods of Mechanical Theorems”. Ten centuries on, it would be the only surviving copy, and would have experienced so much damage during its chequered history that the full armoury of twenty-first century science would be needed to decipher its contents.

Archimedes is remembered for his brilliant calculating abilities. When a Roman fleet attacked his home town of Syracuse, he used those abilities to design levers that would lift the Roman ships clean out of the water and shake the sailors from them like weevils from a ship’s biscuit. “Methods of Mechanical Theorems” revealed that he had also developed original methods for doing more advanced calculations, one of which anticipated the basic idea underlying modern integral calculus by almost two thousand years.

The contents of the original manuscript were largely obscured by the actions of a twelfth century Christian monk, who bleached the original writing with a weak acid (probably lemon juice) and then rubbed out most of what was left with a pumice stone so that he could re-use the expensive parchment to write a liturgical text at right angles to the earlier text. The new text was called a palimpsest. This particular palimpsest survived the burning of books during the Fourth Crusade of 1204 AD before it disappeared from view for seven hundred years, to be rediscovered in 1906 by the Danish philologist Johan Heiberg in the Church of the Holy Sepulchre in Jerusalem. Heiberg recognized the remnants of the underlying writing as a lost work of Archimedes, and photographed the palimpsest’s 177 pages; luckily, as it turned out, because within a year it had gone missing again, this time finding its way into the hands of a forger of antiques who thought to add value to it by adding fake evangelical portraits in gold leaf to four of its pages, obscuring the underlying writing completely.

The manuscript resurfaced at a Christie’s auction in Paris in 1988, and was bought for two million dollars by an anonymous American IT billionaire, who loaned it to the Walters Art Museum in Baltimore for expert scientific examination. Heiberg’s photographs had already revealed some of Archimedes’ original methods, and soon some 80% of the manuscript had been deciphered through techniques that included optical character recognition, where a computer is trained to recognise fragments of ancient Greek symbols, and multi-spectral imaging, which combines images as they appear under different colours of light (you can try this for yourself; see http://www.cis.rit.edu/people/faculty/easton). The new information showed that, as well as discovering the basic method of the calculus before anyone else, Archimedes also appears to have discovered statistics before anyone else, using it to calculate the number of ways that a toy puzzle popular with ancient children could be solved.

There remained that tantalising 20%, including the writing hidden under the gold leaf. Serendipity stepped in when a magazine article mentioning that the ancient ink contained iron fell into the hands of Uwe Bergmann, a scientist who works at the synchrotron facility of Stanford University.

A synchrotron is an evacuated doughnut-shaped tube some 80 meters in diameter, around which electrons travel at nearly the speed of light. The tube consists of a series of straight sections connected by sharp bends. When the electrons reach a bend, they are accelerated around it by a magnet, a process that causes them to emit an intense focussed beam of radiation. The radiation includes X-rays, which Bergman realized were an ideal tool to uncover the hidden writing in the Archimedes palimpsest, since they could be used to excite fluorescence from the iron in the remaining traces of ink, thus lighting up the hidden writing.

There was only one problem – a beam of X-rays that intense could easily burn a hole straight through the precious manuscript. The answer was to develop a method of rapidly scanning the beam across the page, so that any one part was only exposed to it for a few thousandths of a second. By this method the writing under the gold, together with writing too far gone to be revealed by other methods, is gradually being uncovered.

I asked Mark Pollard, Professor of Archaeological Science at the University of Oxford, whether tools such as the synchrotron are seen as particularly valuable by working archaeologists. His enlightening answer was that they can be useful, but that too often in the past such tools have been no more than expensive techniques in search of a significant problem. Judging by the example of the Archimedes palimpsest, it won’t be too long before they find many more.

BASED ON AN ARTICLE WRITTEN FOR EUREKA IN 2005. The project is still ongoing, and my comment in the last sentence is coming to fruition; see http://archimedespalimpsest.org/about/imaging/