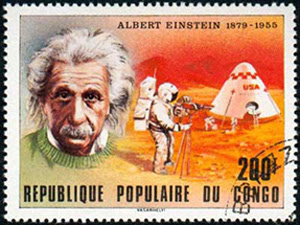 The trouble with you, Mr. Einstein, is that you don’t know how to count.

The calculations that Einstein performed to draw his conclusions from the simple initial “what if?” assumption needed a new sort of mathematics. Just as he may have been stung by his violin teacher into thoroughly mastering the violin, and just as painters have to master their brushes, and carpenters their hammers and saws, before embarking on their craft, so Einstein set out to master the necessary mathematics before he attempted to tackle his new problem.

It was not an easy task, because the mathematics that he needed (called tensor calculus) was very new. He once received a letter from a schoolgirl complaining of her difficulty with mathematics. With characteristic charm, he wrote back straight away, saying “Don’t worry. Whatever your difficulties are with mathematics, mine are greater.”

He overcame those difficulties with the help of his university friend Marcel Grossman, who was familiar with tensor calculus, and undertook to mentor Einstein in its use. Sometimes we need such mentors, and finding the right one in any field can be the key to ultimate success.

With the tools in hand, Einstein was able to develop his Special Theory of Relativity, which caught the public imagination as no other scientific theory ever has. Popular magazines devoted pages to it, and it became a regular topic of conversation at dinner parties (often along the trivial lines “so Einstein shows that everything is relative. What’s so new about that?”). Its public appeal was partly due to Einstein’s personal image, and partly to a casual comment by the British physicist Sir Arthur Eddington, who commented to a journalist that the theory was too difficult to understand. By a complex social process, Eddington’s remark was turned into the famous apocryphal story that only three people in the world could understand relativity (when a fellow physicist, James Jeans, heard this rumour, he is said to have remarked “I wonder who the other one is?”).

But many tried to understand it, including the Archbishop of Canterbury, who had himself tutored in the theory by the Cambridge physicist J.J. Thomson before daring to meet Einstein at a dinner party. In fact, the Special Theory of Relativity is less complicated than the theory of the stability of a bicycle. These days we teach it to first year students, along with the elements of tensor calculus.

But this calculus was not the only item in Einstein’s toolbox. There was also his violin.

Einstein used his violin to help him stand back. A friend told his biographer, Walter Isaacson, “He would often play his violin in his kitchen late at night, improvising melodies while he pondered complicated problems. Then, suddenly, in the middle of playing he would announce excitedly. “I’ve got it!” As if by inspiration, the answer to the problem would have come to him in the middle of the music.”

This is a trick that psychologists now recommend when we have a difficult problem to face. Think hard about it, but then stand back for a while and let your unconscious mind sort it out. It is a technique that many creative people use, and which more of us could adopt.

Yes, we have a lot to learn from Einstein.