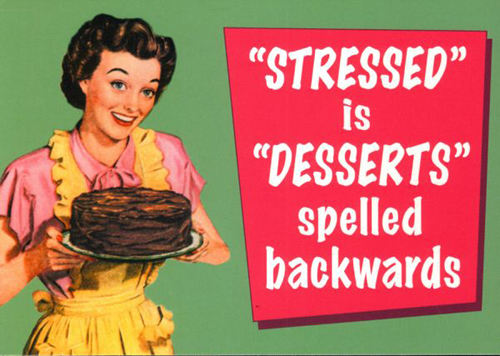 Reality is the leading cause of stress

What is stress? How does it wreak its havoc? How can we tell when it is reaching dangerous levels? Is it the same for human relationships as it is in the physical world?

Many of us think that we understand stress intuitively – and many of us would be wrong, because its meaning in everyday speech can be quite different to that which it has for scientists and engineers.

The everyday meaning comes from biology and psychology, where stress is often seen as a response to a situation. “Reality is the leading cause of stress,” declares Lily Tomlin. “All my stress comes from people not playing the game of life by my rules!” screams the subject in a cartoon that adorns my study door.

Engineers and physical scientists, however, refer to stress as being applied to something. The precise physical definition, originated by the French mathematician Augustin-Louis Cauchy in 1822, is that stress is the force (or load) applied to something, divided by the area over which it is applied. When someone wearing high heels accidentally steps on my foot, for example, the stress that they apply depends on their weight, and inversely on the area of the heel.

When real materials are subject to stress, their response is to deform. The fractional deformation (such as the increase in length of a stretched spring divided by its original length, or the fractional compression of a bone in my foot) is called strain. A lot of confusion could be avoided if we used the term ‘strain’ when we talked about our response to a stressful situation.

The confusion arose because the Hungarian/Canadian endocrinologist Hans Selye had only a limited command of English when he introduced the concept into biology in 1937. He later admitted that, had his knowledge of English been more precise, he would gave gone down in history as the father of the “strain” concept rather than the “stress” concept.

Selye was looking for a word to describe his discovery that animal bodies have a very similar set of responses to a wide variety of “nocuous agents,” such as cold, pain, illness or drugs. Not knowing that the word already had a precise physical definition, he decided to call this set of responses “stress,” which he defined as “the non-specific response of the body to any demand for change.”

The confusion between the physical and biological meanings of “stress” has been exacerbated by the fact that it is now a popular buzz-word, with such a wide variety of meanings that it has become essentially meaningless. Its meaning varies even among professional psychologists. Some use it to mean a response, some see it as being applied from the outside, and some even use it interchangeably to mean both. Selye himself was guilty of ignoring his own definition on occasion, and used the word interchangeably to mean a cause in some instances, and an effect in others. An examination of verbatim citations from his own writings led to the conclusion that “Stress, in addition to being itself, was also the cause of itself, and the result of itself.”

“If you were to ask a dozen people to define stress,” says the official website of the American Institute of Stress “or explain what causes stress for them, or how stress affects them, you would likely get 12 different answers to each of these requests. The reason for this is that there is no definition of stress that everyone agrees on … .” They conclude that stress “is not a useful term for scientists because it is such a highly subjective phenomenon that it defies definition.”

ADAPTED FROM CHAPTER 4 OF Crashes, Crises and Calamities