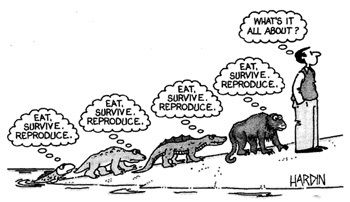 The world is full of mysteries. Until the last few hundred years, these were thought to be the prerogative of religion and philosophy. But with the advent of science, a new category has come into being –  “necessary” mysteries.

In their efforts to explain experimental results, scientists have come to have faith in the existence of a whole range of entities and effects that lie forever outside the range of our direct experience. We believe, for example, that heat, light, radio waves, motion, and even the work that we do when we dig in the garden are all forms of energy, an entity that no-one can ever experience directly, but only through its different manifestations. We also believe that electrically charged objects are surrounded by an invisible field of force, that light behaves as a wave even though it appears to travel as individual particles called photons, and that all materials are built up from atoms which are far too small ever to see or feel. All of these notions defied the common sense of their day, as did the idea that biological organisms might generate their own electricity for use in internal communications, and even in thought, or the notion that groups of molecules can “self-organize” themselves to form the structures of life. Scientists such as myself have been trained to accept these beliefs and to use them as tools to further our understanding of the world. They are not just the prerogative of the scientist, however. They are everyone’s concern.

They are very different from the mysteries that religion and philosophy seek to address. These mysteries, concerned with the very nature of life, the Universe, and everything, to use Douglas Adams’ apt (if dismissive) phrase, are no less important than science’s “necessary mysteries”, despite what scientists such as Richard Dawkins might say.

To tackle mysteries of either type, people use belief. The major difference between scientific and religious belief is in the way that it is buttressed. Scientific beliefs are buttressed by checking them against reality. Religious beliefs are buttressed by how effectively they help the believer to make sense of the world in which they find themselves. One can go into philosophical arabesques about the meaning of “reality” and so on, but it really is as simple as that.

Our view of ourselves and our place in the Universe has been profoundly affected by the discoveries and beliefs of science. This has made many people uncomfortable, and even angry that science has taken away the essential mystery of life. Certainly science has removed some of the myths that resulted from ignorance, but I for one would not wish to go back to the days where disease, for example, was believed to be the result of witchcraft or “miasmas”, rather than arising from concrete causes such as bacteria or viruses. Nor would I wish to live in an era where the authoritative pronouncements of a cleric or philosopher on how Nature ought to behave took precedence over direct observation of how Nature actually behaves.

This is not to say that experiment and observation can answer all of our questions about Nature (even though some scientists, with more hubris than sense, seem to think that it can). There is a whole host of questions that are too important to ignore, but too difficult or impossible to answer from physical observation alone. These questions remain the province of philosophy and religion, and answers are only to be found with recourse to faith in a particular set of axioms or in a religious creed. Some scientists believe that recourse to faith rules such answers out of court, without recognizing that science, too, has its own brand of faith – the belief that an answer is likely to be true if the results that it predicts are in accord with experimental observation. The more accurate the observation, and the more critical the questions that the experimenter asks, the greater is the scientist’s faith in the answer, but this does not mean that the answer is “right”, or that the scientist has discovered “truth”. Scientific theories can never really be proved to be true; we simply have faith in them to a greater or lesser extent depending on the difficulty and number of tests that they have passed.

The “necessary mysteries” which scientists now accept as a result of these tests lie alongside the other set of eternal mysteries that are the province of philosophy and religion. The reality of such “necessary mysteries” is overwhelmingly supported by experimental evidence and their existence, to my mind, constitutes very strong evidence for the existence of a world beyond our direct experience. What the nature of that world is, I have no idea, and I am not even sure what I mean by the concept. Whatever it is, science needs it to understand the behaviour of Nature in our own world, and in its attempts to do so has provided us with a set of mysteries that are every bit as deep and interesting as those that have emerged from our attempts to answer the traditional great questions that will forever continue to challenge us.

NOTE: Adapted from a longer discussion in Weighing the Soul