84. On hot apple pies, exploding kedgeree and the birth of a new idea 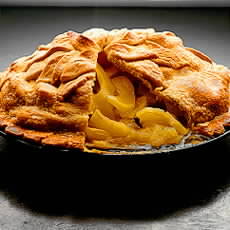 I haven’t yet finished with Count Rumford, because his encounters with heat didn’t end with brass cannons. Apple pies were also on the menu, and their properties puzzled him:

When dining, I had often observed that some some particular dishes retain their Heat much longer than others, and that apple pies … remained hot for a surprising length of time … I never burnt my mouth with them, or saw others meet with the same misfortune, without endeavouring, but in vain, to find some way of accounting … for this surprising phenomenon [which also occurs with pizzas!]

Rumford was puzzled because at this time (200 years ago) water was thought to be a good conductor, able to transfer heat efficiently, so that water-laden foods should cool down quickly. Then he had the thought that maybe water only transfers heat efficiently if the water itself is able to move freely, carrying the heat with it in the process that he was the first to recognize and label as convection.

To test his idea, he heated up to identical pans of water, into one of which he stuffed an eiderdown(!). I can’t imagine being permitted to do this experiment in my own home, but it worked – the water in the pan with the eiderdown was unable to circulate freely, and cooled down much more slowly.

There is an addendum to this little story. I was giving a lecture to an English Women’s Institute on how slowly foods cool down in the absence of convection. To demonstrate, I baked an apple pie beforehand, and removed it from the oven at the beginning of the forty-minute talk. At the end, it was still satisfactorily hot. Then a member of the audience came up and said “Talking of hot food, can you tell me why my kedgeree exploded?”

It appeared that she had reheated some kedgeree in her microwave oven and put it in the centre of the breakfast table for her guests. A couple of minutes later, it exploded without warning, showering her guests with haddock and yellow rice.

I guessed the answer, and my colleague Peter Barham later confirmed it. By heating it in the microwave, she had created little pockets of superheated steam in the rice grains. The food being such a good insulator, these remained superheated until someone bumped the table, causing the steam to condense and the grains to implode!

There’s a warning here for us all, and also a message – keep your eyes open and you mind working, and one day you too might make a Rumford-like discovery.