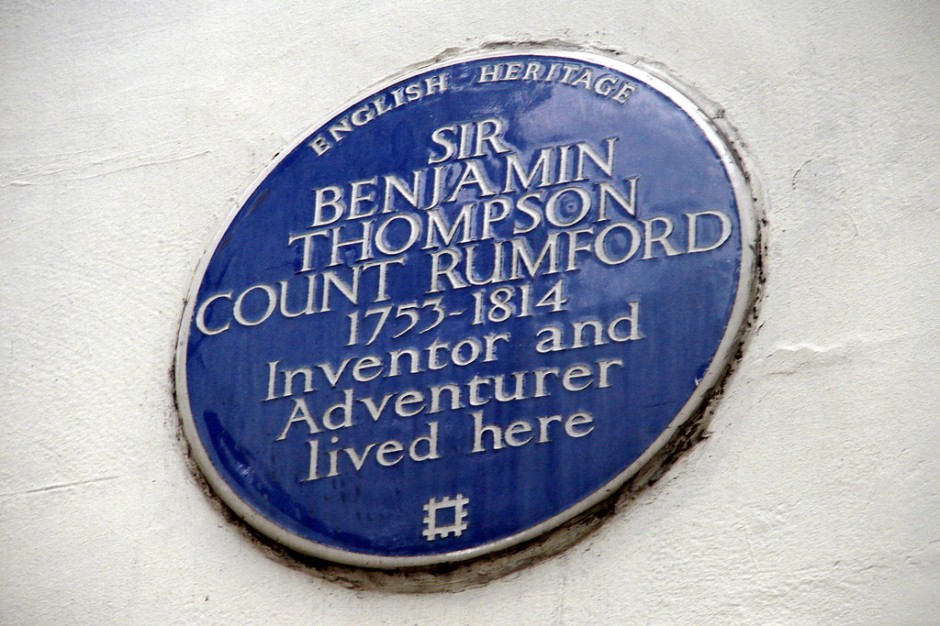 I collect encyclopedias. They occupy a wall-length bookcase in an upper room of my house, whose floor had to be reinforced to take them.

I collect them because I am interested to see how knowledge and understanding have changed over time. That change is nowhere better encapsulated than in the story of heat.

If you look up “heat” in an encyclopedia published in the 1820s, the entry simply says “see caloric.” Because, up until that time, our picture of heat was a common sense one. Heat flows from place to place, right? So it must be some sort of fluid, right? All we need to do is to give the fluid a name. That name was “caloric”.

All of that changed after an American called Benjamin Thompson was put in charge of British troops during the American War of Independence. As I have described in some of my “stray thoughts,” one of his (probably deliberate) acts at a village called Huntingdon was to use gravestones from the local cemetery to build bread ovens, with the inscribed side of the gravestones on the inside of the ovens, so that when spare loaves were distributed to the local inhabitants they came with the names of their dead relatives baked backwards into the crusts.

After that, it was “considered prudent” that Thompson should be recalled to England. Eventually he moved to Bavaria, managed to have himself rebranded as Count Rumford of the Holy Roman Empire, and was put in charge of the Munich arsenal. What happened next revolutionized our understanding of heat. Here it is, described here in his own words:

Being engaged… in the boring of cannon, I was struck with the very considerable degree of Heat which a brass gun acquires …in being bored. … the source of the Heat generated by friction …appears to be inexhaustible. It is hardly necessary to add, that anything which any insulated body … can continue to furnish without limitation, cannot possibly be a material substance; and it appears to me to be extremely difficult, if not quite impossible, to form any distinct idea of anything, capable of being excited and communicated, in the manner that Heat was excited and communicated in these Experiments, except it be MOTION.

And THAT, my dear readers, is how our modern idea of heat came into being. As with so many other good scientific ideas, it came through seeing what everybody else has seen, and thinking what nobody else has thought*. Its subsequent history involved suicide, beer, apple pies, and a honeymoon. But more of that anon.