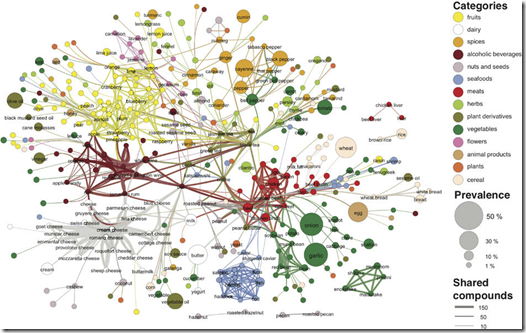 There is a new cookbook out: Cognitive Cooking with chef Watson. The underlying idea is that IBM’s supercomputer “Watson” has looked at the individual flavour compounds in different foods, and created new dishes by matching up the foods that have flavour components in common.

It is an old idea, currently fashionable* but unfortunately it has little or no scientific basis. In the most thorough study of which I am aware**, a group of physical and computer scientists examined some 50,000 recipes. They did indeed find some flavour components in common within each recipes – but only in Western cuisine, and not all of that. If there was anything to the theory, Asian recipes would follow a similar pattern, but these, by contrast, tended to avoid such combinations. And in any case, there are many other factors involved in our appreciation of food.

The recipes were also “curated” by a group of chefs before publication, so there was a selective human input in any case. As one reviewer put it “They basically go for variations on typical dishes with a dash or substitution of ingredients you would not necessary expect.”

All of this is supposed to represent a new “scientific” approach to cooking (but see my post 49 “Molecular biology: The true story”, where I reveal how the whole idea of “molecular gastronomy” started as a joke that has now been taken too seriously). But how scientific is it?

Let’s compare “Watson”’s approach with that of Nobel Laureate James Watson. The computer Watson follows a prescribed set of rules (it would be quite interesting to see how it rates the various recipes in terms of these rules). Many people seem to believe that science works in a rather similar way (see my post 17 “Bacon and eggs”, for example). But anyone who has read the human Watson’s book The Double Helix will realize that scientists don’t just follow a prescribed method; intuition, serendipity, and experience (theirs and other people’s) all come into it, as the following anecdote from “The Double Helix” shows:

In a moment of after-supper boredom I had read a Faraday Society Discussion on “The Structure of Metals”. It contained an ingenious theory by the theoretician F.C.Frank on how crystals grow. …. the paradox [that crystals could not grow at the observed rates] vanished if the crystals were not as regular as suspected, but contained dislocations resulting in the perpetual presence of cosy corners into which new molecules could fit..

……. the notion came to me that each TMV particle should be thought of as a tiny crystal growing like other crystals …. the simplest way to generate cosy corners was to have the subunits helically arranged……. Every helical staircase I saw … made me more confident.

Future generations of computers may well learn to display intuitive leaps like this, just as the best chefs do, and as do most of us from time to time. But “Watson” is simply following prescribed rules, derived from a theory whose underlying logic is “it sounds reasonable, so it must be true,” but which does not check out against reality in any convincing way. The result is an approach that is more mechanical “cog” than it is truly cognitive, and which is certainly very far from scientific.

More of this in the next post, which will not be computer-generated. On the other hand, maybe this one was. Could you tell? Could Watson?

**You can read all about it in http://www.nature.com/srep/2011/111215/srep00196/pdf/srep00196.pdf, where the authors’ main conclusion is that “this work provides an example of how the data-driven network analysis methods that have transformed biology and the social sciences in recent years can yield new insights in other areas, such as food science.” But they don’t really; not in this case, at least.