60. What is the Nash equilibrium? Why does it matter? 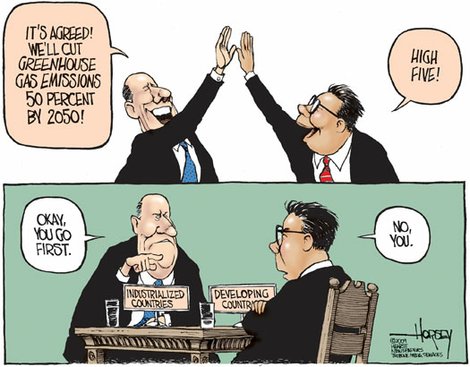 If you want to understand the Nash equilibrium and why it is so important to our society and our lives, the one thing that you should not do (unless you are a very serious mathematician indeed) is to attempt to infer these qualities from Nash’s incredibly short original paper, published in the Proceedings of the National Academy of Sciences of the U.S.A., Vol. 36 (1950) pp. 48-49 (http://web.mit.edu/linguistics/events/iap07/Nash-Eqm.pdf). It is a superb display of top-flight mathematical thinking, but undoubtedly needs translation for the rest of us.
Fortunately, although mathematics was required for the proof, the basic idea is easy to grasp in non-mathematical terms, as are its frightening ramifications.
What is a Nash equilibrium? Put simply, it is a position in a situation of competition or conflict where both sides have selected a strategy, and where neither side can then independently change their strategy without ending up in a less desirable position. If we’re walking toward each other on a narrow sidewalk, for example, and we both step aside to squeeze past, we’ll find ourselves in a Nash equilibrium because, if either of us independently changed our mind and stepped back, we would only come face-to-face again, with the consequent merry little dance that most of us have experienced.
In probably the shortest scientific paper ever to win its author a Nobel Prize, Nash used a combination of symbolic logic and advanced mathematics to prove that there is always a Nash equilibrium waiting to trap us in “non-cooperative” situations – that is, situations where the parties are either not able or not willing to communicate. Cooperation may serve us well, but if we cannot negotiate successfully from a position that may be bad for both parties, any attempt by either party to improve their position will result in a (perfectly logical) reaction by the other party where both end up in a worse position than before.
Just look through any newspaper, or any celebrity gossip magazine, and you’ll find examples of the sort of logic that Nash was talking about. Think of two people involved in an acrimonious divorce, or two nations on the brink of war. It would pay both parties to compromise, but so long as one refuses to compromise, it is not worth the other party’s while to give way. They become trapped in a Nash equilibrium where they both lose out. In the case of a divorcing couple, the loss is through emotional stress and the money paid to lawyers. In the case of nations confronting each other, the results can be much more serious.
Before Nash’s discovery, our frequent failure to cooperate with others for mutual benefit was most often thought of in terms of our psychology and/or our morality. The significance of his discovery is the demonstration that a genuine logical paradox, rather than emotional or moral factors, lies at the heart of many of our most serious problems, from resource depletion and global warming to corruption, collapsing societies and war. Cooperation could help resolve such problems, but Nash’s trap blocks us again and again.