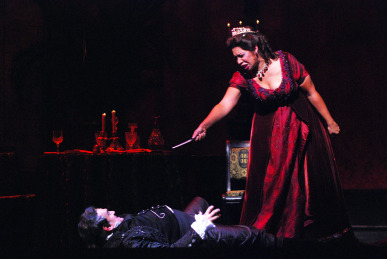 The problem that John Nash analyzed concerned situations (all too common in real life) where cooperation would produce the best overall outcome, but where individuals can be tempted by the logic of self-interest to cheat on the cooperation. When both sides cheat, however, the results can be catastrophic, as the characters in Puccini’s opera Tosca discover when they are caught in the situation that game theorists now call the Prisoner’s Dilemma.

Tosca, the heroine of the plot, is faced with an unenviable choice. Her lover Cavaradossi has been condemned to death by the corrupt police chief Scarpia. Tosca is left alone with Scarpia, who thinks that he is on to a good thing when he offers to have the firing squad use blank bullets if Tosca will let him have his wicked way with her. What should Tosca do? She spies a knife on the table, and works out that she can win both ways by agreeing to Scarpia’s proposal, but actually stabbing him when he comes close. Unfortunately for her, Scarpia has already worked out that he can win both ways by not really telling the firing squad to use blank bullets. He dies, Cavaradossi dies, and when Tosca finds out what has happened, she flings herself off a castle parapet and dies too. Everyone is a loser, as is often the way with opera.

Everyone is a loser in real life as well when caught in this particular sort of dilemma. Game theorists call it the Prisoner’s Dilemma after an example used by Stanford University mathematician Albert Tucker to illustrate the problem to a group of psychologists in the early 1950s.

The story has since appeared in various incarnations. In one of them, two thieves (let’s call them Bernard and Frank, after two of the conspirators in the Watergate scandal) have been caught by the police, but the prosecutor has only enough evidence to put them behind bars for two years on a charge of carrying a concealed weapon, rather than the maximum penalty of ten years that they would get for burglary. So long as they both plead “not guilty”, they will both get only two years, but the prosecutor has a persuasive argument to get them to change their pleas.

He first approaches Bernard in his cell, and points out that if Frank pleads guilty but Bernard doesn’t, Frank will receive a reduced sentence of four years for pleading guilty, but Bernard will get the maximum ten years. So Bernard’s best bet, if he believes that Frank will plead guilty, is to plead guilty as well, so as to receive four years rather than ten. “Furthermore” says the prosecutor “I can offer you a deal that if you plead guilty and Frank doesn’t, you can go free for turning state’s evidence!”

No matter what Frank does, it seems that Bernard will always do better for himself by pleading guilty. The logic seems irrefutable – and it is. The trouble is that the prosecutor has made the same offer to Frank, who has come to the same conclusion. So they both plead guilty – and they both end up in jail for four years, rather than the two years that they would have received if they had both kept their mouths shut.

If you think that this little story has uncomfortably close parallels with the U.S. legal practice of plea bargaining, you are dead right. This is why the practice is outlawed in many countries. The logical paradox illustrated by the story affects us in many situations, from divorce to war; so many, in fact, that it has been proposed as the basic problem of sociology, since our efforts to live together in a co-operative and harmonious way are so often undermined by it.

The great breakthrough in understanding the Prisoner’s Dilemma (and other social dilemmas that regularly confront us) came in 1949, when John Nash discovered that all of them arise from the same basic logical trap. Nash’s name is now familiar to many people as the schizophrenic, Nobel Prize-winning anti-hero of the film A Beautiful Mind, but the film focussed almost exclusively on his mental illness. It gave little indication of what his Nobel Prize-winning discovery actually was, or how incredibly important it is to our understanding of the problems of cooperation and what we might be able to do about them.

Nash made his discovery when he was just 21, and not yet suffering from the schizophrenia that was to blight much of his life. He is even able to joke about it. He said in one interview: “Mathematicians are comparatively sane as a group. It is the people who study logic that are not so sane.” He had arrived at Princeton University in 1948 to study for a post-graduate degree in mathematics, bearing a laconic one-line recommendation from his previous professor “This man is a genius.” He proved his genius within eighteen months by using the recently developed science of game theory, first to identify the logical trap (which has now become known as the Nash equilibrium), and then to prove a startling proposition – that there is at least one Nash equilibrium lying in wait to trap us in every situation of competition or conflict where the parties are unwilling or unable to communicate.

In the next post I will examine just what the trap is, and why it causes such excruciating problems.

Addendum: The Tosca example was uncovered by journalist Bill Poundstone, and first appeared in his book “Prisoner’s Dilemma”.