52. The man who fed Prozac to clams 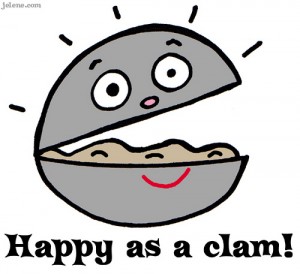 Harvard has slipped to sixth in the Times Higher Education’s list of the world’s top universities (https://www.timeshighereducation.com/world-university-rankings/2017/world-ranking#!/page/0/length/25/sort_by/rank_label/sort_order/asc/cols/rank_only). I wonder whether part of the reason might be its continued sponsorship of a ceremony that seems to be the antithesis of scholarly excellence – the annual award ceremony for the spoof IgNobel Prizes. But appearances can be deceptive.

The current motto for the prizes is “first, they make you laugh; then, they make you think.” Certainly the idea of feeding Prozac to clams, subject of the 1998 biology prize, makes you laugh. But the story behind it required some very original scientific thinking.

The thinker was Peter Fong, a professor at Gettysburgh College in Pennsylvania. Peter was aware that clam farmers in rich Western countries like the U.S. used chemicals to induce the clams to spawn in synchrony, thus increasing the yield of baby clams. But the chemicals used are very expensive, and not affordable by farmers in third-world countries, who were thus placed under a disadvantage.

What Peter noticed was that the molecule Prozac had a very similar structure, and was very much cheaper. So he thought “why not try it?” And of course it worked, or I would not be telling you this story.

Peter’s discovery put third-world clam farmers on a more equal footing with their Western counterparts. You can read all about the science in his paper “Induction and Potentiation of Parturition in Fimngernail Clams (Sphaerium striatinum) by Selective Serotonin Re-Uptake Inhibitors (SSRIs)” in Journal of Experimental Zoology Vol. 280 (1998) pp. 260 264 with Peter Huminski and Lynette D’urso. Or you can find out about Peter’s and other IgNobel Prizes at http://www.improbable.com/ig/winners/ .