51. Amethystic thinking; the origin of homeopathy? 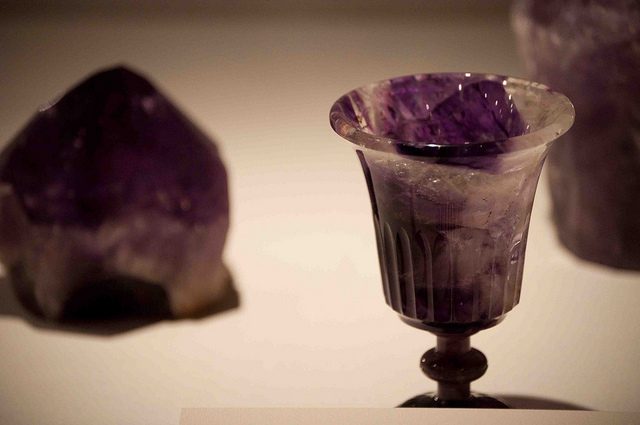 Like artists of all kinds, scientists often toil better in the shadow of the corkscrew (Alan Coren’s phrase, not mine: see Go Easy Mr Beethoven; That Was Your Fifth http://www.amazon.com.au/Chocolate-Cuckoo-Clocks-Essential-Coren-ebook/dp/B002RI9UEU). And it was while having a glass of wine that the idea for this post came to me.

It wasn’t just the wine. I was watching an old episode of BBC TV’s Antiques Roadshow, and an amethyst brooch came up. But it wasn’t the value that caught my attention; it was the expert’s comment that “amethyst was thought to prevent drunkenness.” This was something that I had to know about.

What I did next was what any scientist would have done. I went to the inappropriately named “literature” to find out what was known about this phenomenon.

What I found was that the belief that amethyst prevents drunkenness goes back at least to the ancient Greeks, who wore amethyst jewellery (as did the Romans who took up the belief) to ward off the effects of excessive alcohol. Delving further, I came across an article (http://www.jstor.org/discover/10.2307/1086970?sid=21105606835501&uid=3737536&uid=2&uid=4 ; don’t say I’m not giving you plenty of links!) that referred to a parchment document dating from the twelfth century, and purporting to be from the mythical Prester John, supposedly a Christian patriarch who ruled over a Christian kingdom in the middle of the otherwise Moslem world. The legend is spurious, but the document was real, and referred to the belief that amethyst prevents drunkenness, together with the even more astounding belief that sapphire prevents carnal thoughts.

Apparently quite a lot of sapphire is required, though, since “Prester John” claimed to have slept on a bed made of sapphire, so probably my choice of sapphire for my wife’s engagement ring (to match her eyes) was OK. But when it comes to amethyst, I found an unexpected scientific link, since compounds that suppress the effects of alcohol are now known as “amethystic”.

There is a considerable literature on these, although the subject is a difficult one, since most drugs are based on blocking a specific receptor for the molecule concerned, and there is no known specific receptor for ethanol. There is also the ethical question of how to use such a drug, since it is possible in principle that if one were discovered, it could be misused in order for people to be able to drink more.

The woo-woo brigade have also got busy, although most of what they have to say appears to be about the effect of amethyst on dreams (e.g. http://scholar.google.com.au/scholar?hl=en&q=clarity+and+intoxication+-+the+proving+of+amethyst&btnG=&as_sdt=1%2C5&as_sdtp=) . But it occurs to me that, if amethyst were to have any real effect, it could only be if a drinking vessel were made of amethyst, and released tiny quantities of some hitherto unsuspected material into the drink. An early form of homeopathy, perhaps? In any case, such drinking vessels do actually exist, as the illustration to this post testifies, and I am perfectly willing to give the experiment a try; which is, after, all, what science is really about – testing your beliefs (hypotheses) against reality.

All I’m waiting for is for someone to donate the appropriate vessel. Any takers? I suppose I can only dream.