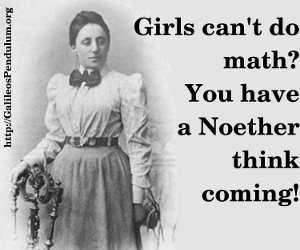 Historic woman scientists are rightly being brought to public attention at the moment, but it isn’t always clear from the publicity just what they were celebrated for. Try this:

Emmy Noether was a German mathematician who made groundbreaking contributions to abstract algebra and theoretical physics. Albert Einstein described her as “the most important woman in the history of mathematics”.

Her work on differential invariants in the calculus of variations, Noether’s theorem, has been called “one of the most important mathematical theorems ever proved in guiding the development of modern physics”.

Under Nazi Germany she was forbidden from teaching. She refused to accept this, and continued to teach in secret*.

The first two paragraphs are probably as clear as mud to most people. But yet what she proved was extraordinarily simple in principle, and she should surely have won a Nobel Prize for one of the deepest insights ever produced into the Laws of Physics. It concerned the two basic conservation laws that all young students are taught:

*The story of her teaching in secret is incorrect. She continued to teach openly, except that she was barred from using the institute’s lecture halls, and had to use her own home, where she accepted even brown shirts as students (http://www-history.mcs.st-and.ac.uk/Biographies/Noether_Emmy.html)