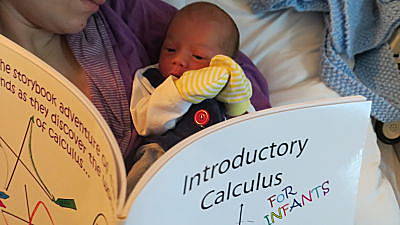 Speaking a language to a baby, even for short periods of time, makes it easier for the child to learn the language later on. Similarly, the ability of a child to use numbers* is enhanced if parents talk to them about numbers to them from a very early age (e.g. http://www.enfant-encyclopedie.com/Pages/PDF/SophianANGxp.pdf).

I sometimes wonder whether this idea could not be taken a great deal further. I discovered recently that my father had started to learn calculus when I was a baby, and that he was in the habit of talking out loud to try to fix the concepts in his mind, with me in my pram nearby in the room. When it came to studying calculus in high school, I was astonished (as were my teachers!) at how easily it came to me.

Was this due to my early childhood experience? Who knows. But there is the germ of an idea here. If learning something as complex as language can be aided by exposure in babyhood, why not the rather less complex ideas of even quite advanced mathematics? There’s a Ph.D. in Education here for someone, at the very least.

*There is a great deal of evidence that babies are surprisingly numerate. Japanese researchers, for example, showed infants objects that made a sound when dropped onto a surface, and then dropped two or three of the objects behind a screen so that the infants heard the tone each item made but could not see the items. They then removed the screen to reveal either the correct number of objects or a different number. The infants looked longer when the number of items revealed did not match the number of tones, indicating that they were able to distinguish between two and three items. Other research indicates that six-month-old infants can also discriminate between larger numerical quantities, provided the numerical ratio between them is large. Six-month-old infants could discriminate between 4 and 8, or even 16 and 32 objects.