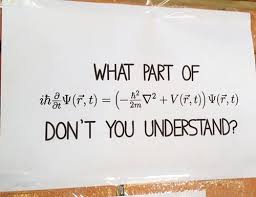 According to The Hitchhiker’s Guide to the Galaxy, the Pan Galactic Gargle Blaster is the best drink in existence, and the effect of drinking one is like having your brains smashed out by a slice of lemon wrapped around a large gold brick.

Which is very much like the effect of trying to understand quantum mechanics.

But if you want to have a go at understanding one of its weirder manifestations, there is no better place to start than with Cornell physicist David Mermin’s brave attempt to explain “spooky action at a distance” – a derisive term originated by Einstein to describe an effect predicted by quantum mechanics, but which seems to defy common sense (https://cp3.irmp.ucl.ac.be/~maltoni/PHY1222/mermin_moon.pdf).

To Einstein, this meant that quantum mechanics was wrong. But Einstein was wrong, because “spooky action at a distance” has now been shown to be real.

Where does Feynman come in? Partly because he earned a Nobel Prize for his contributions to quantum mechanics, but mainly because at the end of Mermin’s article (be warned: although it is (almost) non-mathematical, it is hard going, but rewarding) he arranges some of Feynman’s thoughts so as to make them sublimely poetic. Here they are – try it in poetry, and then in the original prose, for yourself:

We have always had a great deal of difficulty

At least I do,

because I’m an old enough man

that I haven’t got to the point

that this stuff is obvious to me.

Okay, I still get nervous with it ….

You know how it always is,

it takes a generation or two

until it becomes obvious

that there’s no real problem.

I cannot define the real problem,

but I’m not sure

This rather reminds me of Gertrude Stein’s famous reputed last words:

There ain’t no answer.

There ain’t gonna be any answer.

There never has been an answer.

But I doubt that she was thinking about quantum mechanics.