41. Making an emotional connection: How a physicist thought in poetry. 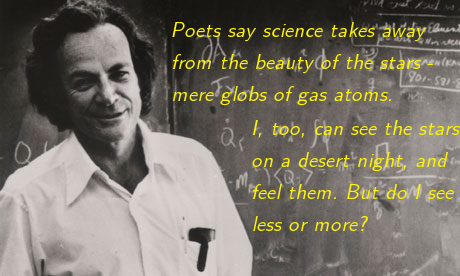 The Nobel Prize-winning physicist Richard Feynman ploughed his own furrow. In his second volume of autobiography What Do You Care What Other People Think? he revealed that he sometimes thought, not just in terms of equations or pictures or models, but in poetry, making an emotional connection with his subject, as in this poem composed while standing at the seashore:

There are the rushing waves

each stupidly minding its own business

yet forming white surf in unison.

before any eyes could see

thunderously pounding the shore as now.

For whom, for what?

On a dead planet

with no life to entertain.

wasted prodigiously by the sun

A mite makes the sea roar.

Deep in the sea

the patterns of one another

till complex new ones are formed.

and a new dance starts.

Growing in size and complexity

dancing a pattern ever more intricate.

Out of the cradle

Stands at the sea,

wonders at wondering: I

a universe of atoms

an atom in the universe.

Feynman goes on “The same thrill, the same awe and mystery, comes again and again when we look at any question deeply enough.”