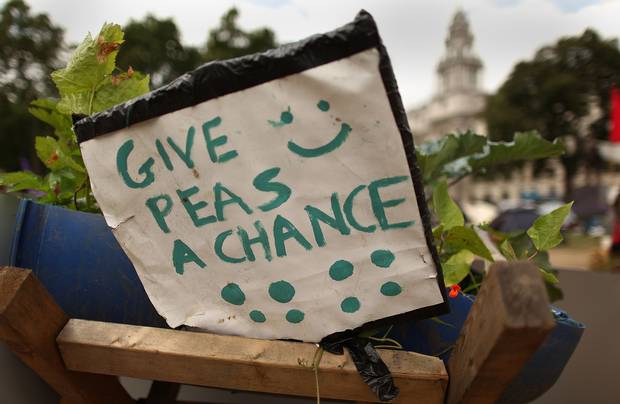 How do you use a packet of frozen peas to catch a polar bear? There’s a science to it. You cut a hole in the ice, distribute the peas symmetrically around it, and hide. Then, when a bear comes up for a pea, you kick him in the icehole.

Ok, maybe that’s not very scientific, except to illustrate the way that certain scientists love puns (the image above was the winning entry in this year’s UK pun competition), but peas have contributed quite a lot to science. Most people will know about the Augustinian friar Gregor Mendel, whose experiments with pea breeding laid the foundations for the modern science of genetics. I was once asked to dress up as Mendel and spend a day in London’s Kew Gardens explaining his experiments to passers-by. I still regret not doing it.

The Abbey in Brno where Mendel did his experiments between 1856 and 1863 still stands, and is now a museum to his memory (and well worth a visit). The statistician R.A. Fisher reanalyzed his data in the 1930s, and found that they were “implausibly close” to the results that Mendel had come to expect – an expectation that we now know to be well-founded. So what happened?

One story that went the rounds was that a monk who helped him knew what answers that he expected after his preliminary experiments, and so “selected’ the experiments that agreed. Another, more plausible idea was that, if the average results didn’t quite fit after a few experiments, Mendel just kept repeating the experiment until they did fit. This is called “confirmation bias”, and can be a real trap if the scientist’s initial belief is wrong – but a brilliant aid if the belief was right, as my next sad tale of two competing scientists (sad for one of them anyway) reveals.