33. Two great amateur scientists you have probably never heard of. 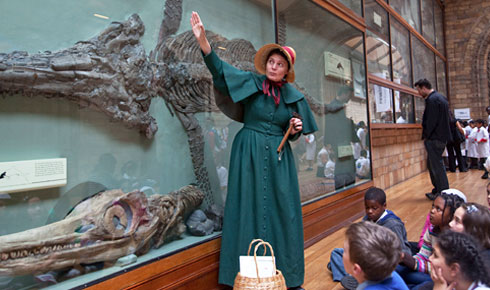 Everyone has a talent, and a particular way of thinking, that can find a place in science.

It’s not always the way that you might think. Take the case of the Rev. Robert Evans, a minister of the Uniting Church in Australia. Not a scientist in the conventional sense (he majored in philosophy and modern history), he discovered in himself a talent for memorizing patterns – in particular, the pattern of stars in the sky. By looking night after night, first with the naked eye, and then with the aid of a small telescope, he noticed in 1981 a sudden brightening of one star out of the cast of thousands. It was a supernova, and he was the first to spot it using his special talent. Since then, he has discovered another 41 – count them, 41! – a not inconsiderable percentage for one man of the thousand or so that have been recorded to date.

Some readers will have heard of Evans, a living legend in the astronomical community. I wonder how many have heard of Mary Anning, a poor daughter of a cabinet-maker, who scraped a living collecting and selling seashells on the Dorset coast in Southern England? It was in her honour that the tongue-twister “she sells seashells by the seashore” was invented. But it wasn’t just seashells that she picked up. This was the Jurassic coast, and she discovered dinosaur skeleton after dinosaur skeleton, new species after new species. Not just that – she worked out dinosaur anatomy, to the extent that she could recognize many species from a single exposed bone (a talent that I sadly lack when it comes to recognizing fossils, as I found when I came to study paleontology). In fact, according to an article in the British Journal for the History of Science (see http://www.sdsc.edu/ScienceWomen/anning.html) she became “the greatest fossilist the world has ever known” – all because of a talent for recognizing shapes and seeing how they fitted in to patterns.