24. Curious letters to scientists I: Cast your bread upon the waters … 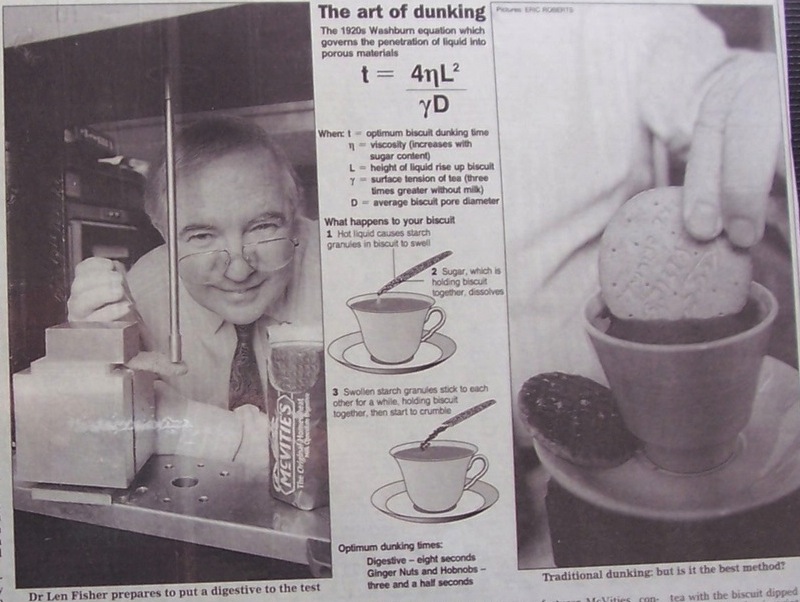 Before the days of the Internet, letters were the most common form of communication, and scientists received some very curious letters from people whom they did not know and who they had never heard of. I have myself received some beauties, especially after I received an IgNobel Prize for using physics to work out the best way to dunk a biscuit.

My intentions were entirely honourable. I wanted to make science accessible by showing how scientists might think about the everyday questions of life, from the mundane to the serious. This was certainly at the mundane end, and provoked an amazing range of responses, including this letter, where I still have the hand-written original in my possession:

I have just watched a programme on TV on how to dunk a biscuit which I believe was a project headed by yourself.

What a complete waste of time, of manpower and machinery. Who in their right mind could sanction this scheme. I am sure you could be more dutifully employed as street cleaners or ticket collectors. Is this what goes on at English Universaties [sic] these days, its no wonder we are falling behind in World affairs.

I also received several letters from people saying that they worshipped me (including one requesting a signed photograph), which I suppose entitles me to think of myself as the head of my own religion.

The most memorable letter, though, was from a 12 year-old schoolboy:

I looked at your formula but don’t think you take in the fact that the thickness of the biscuits can affect the result.

I have a couple of questions for you. What exactly is L – is it how long you hold the biscuit in for? D and t are they constant? D – is the size/diameter of the holes vary and can change. T – would this be variable depending on the density of the biscuit.

Please send me some biscuits for noticing this.

Unfortunately, I had to reply saying that all the biscuits had run out, but thanking him very much for his comments and wishing him well at school.

There is a follow-up to this story. Some twelve years later, the same schoolboy, now qualified as a doctor, wrote to me to say that my reply to his letter, taking him seriously, had been the major factor in stimulating him to take up science.

Which made it all worthwhile.