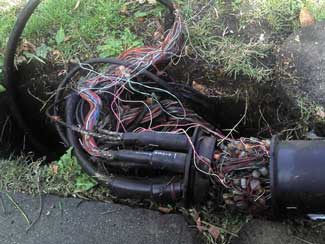 Readers of these stories will have noticed something of a hiatus in the last few days. The reason (or sequence of reasons) is simple: I am in Australia; I live in a rural community; the broadband signal comes down the telephone line; the telephone lines are made of copper; the lines are at least 50 years old, and liable to corrosion, especially in the wet; it rained.

Which makes it difficult to check the facts necessary for my stories, especially since most of my scientific library is in England, where I live half the year. But at least I have been stimulated to think about the myriad ways that scientists communicated with each other before the Internet. So until my line is fixed, I will regale you with a few of those stories, and post them from the wifi hotspot at our friendly local neighbourhood centre.

I begin with Galileo. Because Galileo had a problem. In his youth, the church dignitaries had asked him to calculate the dimensions of Hell, as described by the poet Dante in The Divine Comedy. To Dante, Hell was in the form of a giant ice cream cone, with the point at the centre of the Earth, and the roof forming part of the Earth’s crust, centred on Jerusalem.

But, to accommodate the various denizens of Hell, the roof had to be some 5000 km across, with its boundary passing through Marseille in France and Tashkent in modern-day Uzbekistan. That’s a pretty big span for a dome unsupported by pillars. How thick would it have to be to support its own weight?

This is where Galileo went badly wrong in calculating that it only needed to be 3km thick (I give the details in my book Weighing the Soul). His calculations earned him a cushy job at the University of Padua, but almost as soon as he got there he realized his mistake, and did what any scientist with any sense would have done – he kept his mouth firmly shut while he tried to work out the right answer.

Eventually he did, but it was not until found himself under house arrest in later life that he decided to write it up, in a book called Dialogues Concerning Two New Sciences.

This is where he had his communication problem, because he was banned from publishing in Italy. So, like many a modern author in a repressive environment, he had the book smuggled out to be published elsewhere. In fact, his friends smuggled it to Holland, and persuaded the Dutch publisher Elsevier to print it, where it became a huge success, made the company a lot of money, and laid the foundations for modern engineering and much of modern materials science.

Elsevier are still going strong. I wonder if they would be, if it hadn’t been for Galileo, all those years ago?