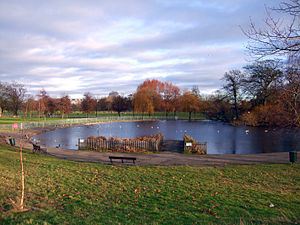 Science is everywhere. All you have to do is to keep your eyes open, and retain your childhood sense of wonder (the French poet Arthur Rimbaud defined genius as “the recovery of childhood at will”). Which is just what Benjamin Franklin did when he was travelling from America to England by ship to petition King George II on behalf of his countrymen. But his important mission did not deter him from keeping an eye on the world around him.

Franklin was puzzled. Looking at the ships around him in the fleet of 96, he “observed the wakes of two of the ships to be remarkably smooth, while the others were ruffled by the wind.” He asked the captain if knew what was happening, and received the contemptuous reply “The cooks have, I suppose, been just emptying their greasy water through the scuppers, which has greased the sides of the ships a little.”

But it wasn’t the ships that were being greased; it was the water. Franklin found this out when he got to London, and found himself near Mount Pond on Clapham Common. Having a cruet of oil in his pocket (no one has ever explained what he was doing with this – did he steal it from his hotel?) he took a teaspoonful (was the teaspoon also pinched?) and dropped it on the water.

In doing so he was following another precept of science; to check observations by reproducing them under controlled circumstances. In truth, the circumstances weren’t that controlled, because he started on the wrong side of the pond, with the wind in his face, and the wind just blew the oil back. When he moved to the other side of the pond and repeated the experiment, though, he observed that “the oil, though no more than a teaspoonful, produced an instant calm over a space several yards square, which spread amazingly, and extended itself gradually till it reached the lee side, making all that quarter of the pond, perhaps half an acre, as smooth as a looking glass.”

This is where Franklin missed his chance, because he had all of the information to calculate the thickness of the film, which had spread until it was just one molecule thick, and hence calculate the size of a molecule. He made many other brilliant discoveries, but this would have been the most brilliant of all. As it was, the first major step in this direction was taken by a German woman with the distinctly unsalubrious name of Agnes Pockels, working, not in a laboratory (she did not even have a university degree), but at her kitchen sink.