21. An interlude with Vestal virgins 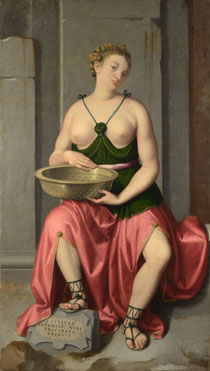 Before going on with the story of oil on troubled waters, we might consider the plight of the vestal virgins of ancient Rome. These were a group of six hand-picked girls from noble families, whose duty was to maintain the sacred flame in the temple of Vesta.

The vestal virgins held unparalleled status as some of the city’s most senior religious leaders. But their status came at a cost – they had to agree to remain virgins for the duration of their time as a Vesta, which was at least thirty years. Failure to maintain their virginity was punished with he unpleasant death of being buried alive.

According to the Roman historian Valerius Maximus, the vestal virgin Tuccia was falsely accused of breaking her vow of chastity, and proved her innocence by carrying a sieve full of water from the river Tiber to the temple. In doing so, she proved herself to be one of the first surface scientists.

The story sounds ridiculous, but in fact it is possible. Tuccia’s sieve (which may have been metal, or may have been a flat woven basket) would of course normally have let water through. But if she had greased it, reasoning that water does not spread on a greased surface, but sit up as droplets that would have to be forced through grease-lined holes, she might have got away with it. In fact, a quick calculation shows that she would have got away with it if the water had been no more than an inch deep, and the gaps in the sieve no more than half a millimeter, which doesn’t seem unreasonable for a tightly woven basket. Try it – although I don’t guarantee it as a test for virginity!

Incidentally, Moroni’s famous 16th century painting of Tuccia and her sieve, held in the National Gallery in London, gets it all wrong. The water level is too high, and the holes are too big. She would never have got away with it.