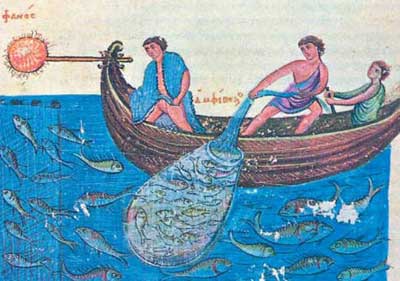 The connecting link between all of the stories in this series is that they illustrate the myriad approaches to scientific thinking. Another connecting link is that each story has suggested others to me, so that the stories constitute a random walk through my own scientific experience and interests. A lot of that experience has been to do with the science of surfaces, so I was very excited to get this email from a German reader of my first book, where I described how Benjamin Franklin had spread oil on a village pond (more on that later):

I enjoy reading your book „Reise zum Mittelpunkt des Frühstückseis“ („How to dunk a Doughnut“) and I want to inform you, that the fisher in Dalmatia have used the method to calm the waves by means of oil probably since the ancient times.
As a child I joined 1950 the fisher fishing in the night at the island of Hvar in Dalmatia. The method was called „pod sviću“ (under a candle), but nowadays you can’t see it any more. They used a wooden boat of about 5-6 meters length. In front there was a wire basket holding burning pine wood above the water. This was the primitive source of light. One fisherman was slowly rowing along the coast, during the so called „dark“ period (two weeks without the moon light every month). The depth under the boat was about 4-6 meters. Another fisherman in front had a basket filled with sand, soaked by oil. And he held a long harpoon (about 5m). We could see fish sleeping at the bottom of the sea. And the bigger fish was killed by harpoon and pulled into the boat. To see better, the fisher in front throw oiled sand in front of the boat. And the waves were at once calmed and the sight got good.
I am not an expert for history, but I believe that probably this method had been used also 2000 Years ago, as the island of Hvar was then the greek colony, and you can find around the island if you are lucky some ancient greek pottery fragments at the bottom of the sea.

This effect is, of course, well known, but I found the detail fascinating. To me, it shows that you don’t have to be a scientist to think in a scientific way in order to solve problems.

In fact, the calming effect of oil on (small!) ripples and waves has been known at least since the time of the Greek philosopher Aristotle, who described how sponge divers would “take oil into their mouths and blow it out in the depths to make illumination and see through the water.”

How the effect works, though, turned out to be quite a puzzle. Aristotle, arguing by analogy (not a bad way to start) thought that it might be acting as a lubricant, causing the wind to slip over the water, rather than ruffle its surface. But Plutarch, who gave us our only account of Aristotle’s otherwise lost description, showed the mind of a true scientist when he said of the sponge divers “surely it is impossible to adduce slipping of the wind here.”

Plutarch’s criticism was wrong, of course, since the oil only exerts its effect once it floats up to the surface of the water. But his approach – that of looking for a counter-example to refute a hypothesis – is one of the main weapons that modern scientists still use.

In fact, it was only in the last decade that scientists worked out how oil does calm troubled waters. But it’s not an answer that can be explained simply without a great deal of background, as the following quote from the relevant 2007 paper shows:

“From the attenuation data at frequencies between 251Hz and 551Hz, we conclude that the calming effect of oil on surface waves is principally due to the dissipation of wave energy caused by the Gibbs surface energy of the monolayer …” http://scitation.aip.org/content/aapt/journal/ajp/75/5/10.1119/1.2710482

Between Aristotle’s original explanation, and a simple explanation of the final answer, lies a string of fascinating stories involving ships’ cooks, teaspoons, and a string of near-misses before an eventual Nobel Prize. Those stories are coming up over the next series of posts.