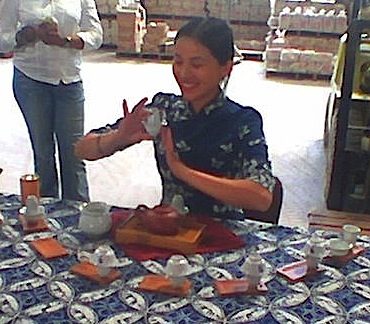 The Chinese New Year, which began this year on January 28th, is a big deal in Sydney, which has a large and vibrant Chinese community, some of whose families go back to the gold rush days of the 1850s. As part of the celebrations, the Art Gallery of New South Wales hosted a demonstration of the traditional Chinese tea ceremony.

The ceremony predates its better-known Japanese cousin, and goes back to the 9th century. By pure chance, I was in the gallery when the demonstration took place. The cultural aspects were fascinating in themselves, but what really caught my eye was the science.

Not that science was directly mentioned. But it was there all right, just as it was when chef Fritz Blank produced a tasting guide for his restaurant describing the best way to eat smoked salmon. Together we turned his guide into a talk at the 2001 Oxford Symposium on Food and Cookery, where we had the audience, each with their own supply of smoked salmon, bread, butter and lemon, following the guide while I described the science behind each step.

It occurred to me as I watched the tea ceremony that I could do something similar for tea tasting. Luckily, I had my camera with me. I couldn’t photograph the actual demonstrations in the low light and with people’s heads in the way, but I could photograph the slides (albeit slightly from the side!). Organizer Shane Shu from the Topotea Company, which sponsored the event, kindly gave me permission to post my photographs here. So here they are, with my brief comments. One day I might expand them in to a full article, but at the moment I am striking while the iron (or tea) is still hot.

The ceremony was The Ceremony of the Literati:

There were two tables set up, one using white porcelain, the other using “red grit” pottery:

The first step was opening the lid of the teapot and paying respect to its creator:

which was measured carefully into a “Ze”, or tea scoop:

As with any other aspect of experimental science (within which I include cookery) careful measurement is crucial, both for comparing the effects of change and for reproducing the result!

The next step was to warm the equipment:

since it requires water to be near boiling temperature to release the essential oils from the tea leaves, and a cold teapot will reduce the temperature. Incidentally, the use of boiling water to release essential oils is not confined to tea – it is used in the laboratory, and on an industrial scale, in the process of steal distillation.

Next step is to rinse the leaves with boiling water:

This is where my scientific mind started to buzz, because rinsing the leaves is something that we don’t usually do when we make our morning cuppa, and I wondered just what its function was. I don’t actually believe that its purpose is simply to expand the leaves – just immersing them in boiling water will do that. I can see, however, that rinsing will remove any residual dust and dirt, and leave the tea clearer and visually more attractive.

Now pour the water from a height on to the leaves:

Scientifically, a great idea! Vigorous stirring will not only release flavours; it will also help to break up the oils (which are not soluble in water) into tiny droplets that will remain in suspension as a micro-emulsion during the life of the tea. The smaller the droplets, the clearer the tea.

Now wait for the tea to brew:

All of the tea is then strained in to a single mug.

Here we can see the benefits of that initial quick wash. Tea leaves remain in the strainer, but tiny dust and dirt particles would have passed through had they not first been removed.

Turn the dividing mug around:

No scientific reason for this that I can see. It is purely cultural, and presumably related to the metaphorical aspects of the ceremony that are described later. But what follows is scientifically very interesting indeed!

There are two cups involved; a “fragrance cup” and a “tasting cup”:

First, the tea is (counterintuitively) poured into the “fragrance cup”. The this is covered with the “tasting cup”, and the combination is turned upside-down!

The tea is shared out equally among the guests:

Then the (now upper) fragrance cup is lifted and the aroma savoured:

The process of savouring the aroma prepares the brain for what is to come; a culmination of the rising expectations that the previous steps have engendered.

Only now do we progress to the actual tea tasting, having first used sight and aroma to enhance our expectations:

Now we move on to the metaphoric/symbolic aspects of the ceremony, seeing the table as a microcosm:

We can see tea brewing as an art form:

Just as much of science is an art form – a way of seeing and understanding ourselves and the world around us.

We may inculcate moral lessons:

or even see tea brewing as a metaphor for life:

and even as a way of living it:

Conclusion: There is much more to tea than meets the eye!