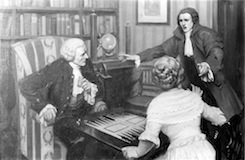 A great deal of nonsense is currently being spouted by people who believe that the days of unfettered “fundamental,” “pure,” “blue-sky” research are over – or, at least, that they ought to be, and that scientists should come out into the “real world,” whatever that may be.

It would be interesting to see the same arguments being applied to religious practitioners, or politicians, or even some businessmen. Be that as it may, I believe that it is time for those of us who have actually been involved in scientific research, and who know from experience how it works in the real world of science, to stand up and be counted. Sir John Cadogan made a good start in 2014 when he produced a report on “Curiosity-driven ‘Blue Sky” Research: A threatened vital activity” (http://learnedsocietywales.ac.uk/node/539). I have had several goes myself (e.g. https://lenfisherscience.com/my-defense-of-basic-science-in-the-wall-street-journal/ ; https://lenfisherscience.com/linking-science-solely-to-practical-outcomes-misses-the-point/).

But Joseph Priestley, the discoverer of oxygen, must surely take the prize for his justification of fundamental science in a letter to his patron Lord Shelburne in December 1778 – the same year that my home country of Australia was colonized (some would say “invaded”) by the English. Priestley argued that “to prosecute original inquiries under your Lordship’s auspices, to indulge my own inclination and ardour in these pursuits” would “tho’ not directly political [be] far from being without its use to a person of your Lordship’s extensive views, and who would establish a character on the broad basis of everything that is liberal and valuable in human society.”

I have argued elsewhere (https://lenfisherscience.com/what-scientists-need-to-know-about-talking-to-politicians/) that scientists can only communicate effectively with most politicians if they can offer them something in return – something that will help to advance their political careers. Priestley seems to have got the message some 228 years ago – and it worked, even if it only resulted in annual expenses to the extent of £20 – £30. Still, research was cheaper in those days.

Here is the full text of Priestley’s letter, kindly sent to me by Mrs Jo Johnston, curator of the collection at Bowood House, where Priestley lived and performed his pioneering experiments: