12. Newton and the cat flap 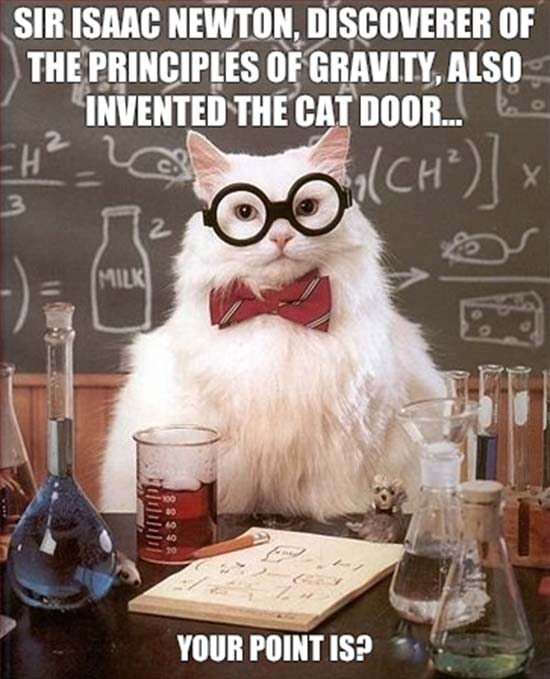 In the last post I gave a brief list of Newton’s achievements (except for one, which I discuss below), but failed to fulfil my self-imposed obligation to say just how he came up with his ideas. In fact, it’s a difficult question to answer, because Newton himself gave very few clues. In this he was at one with some of the other leading mathematicians of his era, who delighted in presenting new theorems without proof, and challenging other mathematicians to discover the proof.

One thing that Newton did say, however, in connection with his Theory of Universal Gravitation, was “I make no hypothesis.” It sounds like a nonsensical statement, given that the theory itself was a hypothesis, and made predictions that could be subjected to experimental test. What he meant, though, was that (unlike Maxwell) he had no picture in his mind of how action at a distance could work. He just thought “what if” all bodies attracted each other with a force that diminished with the square of the distance, and went from there. In this respect, his method of thinking was much like Einstein’s.

One achievement that I did not mention in the last post was Newton’s invention of the cat flap. I didn’t mention it because he probably didn’t invent it. The story itself was invented following the discovery that the door to Newton’s room in Trinity College, Cambridge had two blocked-off holes at the bottom, one smaller than the other, leading to the thought that the larger one must have been for his cat, and the smaller one for her kittens. But there isn’t a shred of proof.