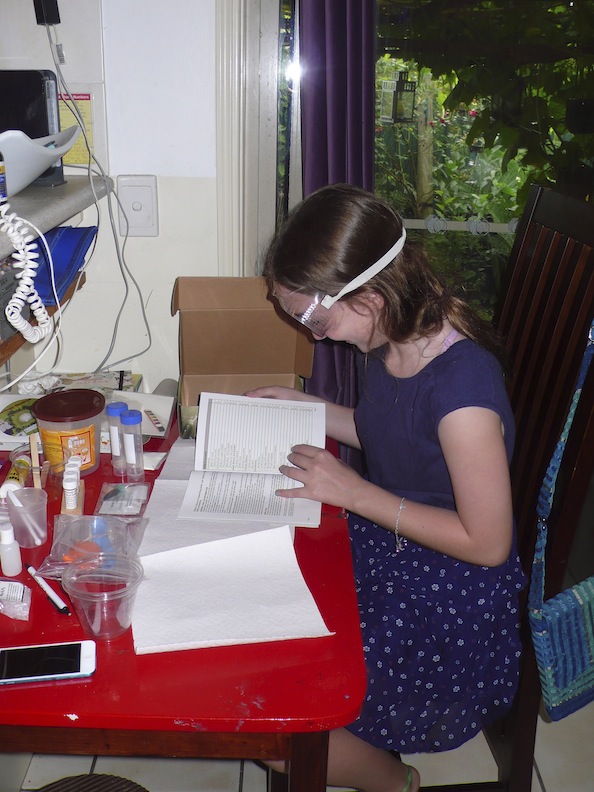 We bought my 11 year-old granddaughter a chemistry set for Christmas. It was her idea, not ours, maybe stimulated by the fact that both of her parents are scientists. We chose one where she could do plenty of colour change reactions; in fact, the first experiment in her little book was the oscillating Belusov-Zhabotinsky reaction, where the colour flips backwards and forwards between orange and blue until the reactants are used up. It’s a tricky one for university students to get right, but she managed it first time.

OK, fine – the instructions were good. But the impressive thing was the way that she started a little notebook. Wait, though. The next experiment was the iodine clock reaction, where one adds sodium thiosulfate to an iodine-containing solution (the remnants of the first one) so that it goes clear and, after a time, suddenly returnes to purple.

What happened next was her idea – to add progressively more drops of thiosulfate and see if it would take longer. She did the experiment, recorded the results, and wanted to do a graph of them. My sole contribution was to draw some extra lines in her notebook to make this possible. Here is what she got:

She even insisted on noting the last, anomalous result (which happened because the iodine was just about used up).

To say that I (and her parents) were staggered would be putting it mildly. But the main lesson, I think, is not that she is exceptional, but that she really wanted to catch on. And wanting to catch on is surely key to any activity in life. Many children want to catch on to kicking a football, or riding a skateboard, or playing a guitar, and will spend endless hours trying. If we could get them to want to catch on to science, as my granddaughter obviously does, what a different future world it might be.