11. The greatest person born on Christmas Day? My vote goes to Newton! 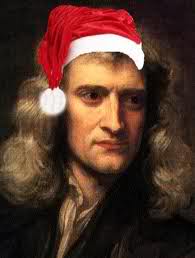 Christmas Day is, of course, the Christian celebration of the birth of Jesus. Isaac Newton, who was born on the same date, spent a great deal of attempting to decipher the Christian scriptures. He wrote much more about this than he did about science, and boy is it turgid stuff to read. By contrast, his scientific writings are a model of clarity, and his gifts to the world in this area include: