The logical way to cut a round Christmas cake

Sir Francis Galton was a Victorian explorer, statistician, student of intelligence and heredity, and all round polymath. In his role as a statistician he came up with a way to analyze the power of prayer by arguing that royalty, being prayed for so frequently in the churches of the country, should live longer than average if the prayers really worked. It goes without saying that, when he examined the data, it turned out that, on average, royal personages have slightly shorter lifetimes than less elevated mortals.

One can see some flaws in his argument, but I can see none in his unique method for cutting a round cake so that the left-over bits (not that there are any in my house!) would not dry out. Unfortunately, I can’t remember who first directed me to his 1906 paper on this subject, but here it is for your delectation: 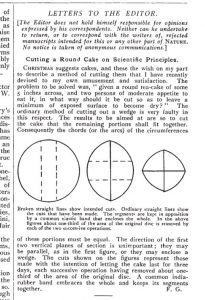