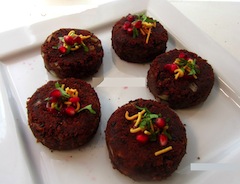 In celebration of the “offal” theme at the 2016 Oxford Symposium on Food and Cookery, here is the wonderful brain cutlet story from Lawrence Durrell’s Prospero’s Cell, a semi-fictional diary of his time on Corfu. The Count is “Count D” (probably an invented character, represented as a recluse who has befriended Durrell and his small group). “Theodore” is the very real and erudite Dr Theodore Stephanides, whom many will recognize from Gerald Durrell’s books about Corfu. Stephanides’s book Island Trails, about Corfu and other Greek islands (London: Macdonald (1973)) is now an expensive rarity. The date of the anecdote is 15.1.38.

“Seated at the great table by the sedate light of his own candles, the Count turns to me and says: ‘It is the pleasantest form of affection to be able to tease one’s friends. You perhaps do not know the history of the Society of Ionian Studies and the brain cutlets?’ At this Theodore shows the faintest signs of impatience, and remarking it, the Count pats him laughingly on the arm. ‘The Doctor’s well-known passion for brain cutlets is something of which you will have undoubtedly heard. Well, some years ago, he was asked to become President of a small informal society of local savants, who were bent on the pursuit of Ionian studies. They were a sombre and bearded collection – for the most part doctors and lawyers of the island: these being the two classes which have the least work to do. At this time our friend was pursuing some studies upon forms of idiocy at the local asylum; and he was particularly interested in the mental condition of an inmate called Giovannides, whose brain he had been coveting off and on for a number of years. In those days he used to speak about Giovannides’s brain with ill-concealed cupidity, and explain what a splendid time he would have when the patient died. You see, he had been promised the brain for dissection. Now it so happened that this long-awaited event took place upon the very day when the inaugural lunch of the society was due to take place at the Doctor’s house; Theodore was in a great state of excitement. He found himself unable to be patient, and spent the whole morning extracting the brain from its brain-case, remembering all the time that he had to get home in time to prepare his speech for the Society. By midday he had succeeded in removing the brain, and, having wrapped it carefully in greaseproof paper, he had managed to reach home with it held in his arms like a precious treasure. On entering the house he realized that the day was exceptionally warm, so he entered the kitchen, where he popped the lunatic’s brain in the ice-box, and retired to his study to prepare his speech. The guests arrived and were seated at table. The speech was delivered and met with restrained applause. And a steaming dish of the Doctor’s favourite brain cutlets appeared, which was greeted with delighted exclamations. As the guests were helping themselves the telephone in the corner of the room rang. It was Theodore’s wife, who had rung up to apologize for having been unable to provide him with his favourite dish for lunch. There was, she said, no brain to be bought anywhere in town. An involuntary cry burst from Theodore’s lips, With a muffled cry of “Giovannides’ brain” he sprang to the kitchen and opened the ice-box. The brain had gone. Speechless with anxiety the good doctor returned to the banqueting-room and found that his guests were all looking either uneasy or downright ill. Where a lesser man would have carried it off without telling them anything definite, and where a greater would have wrung his hands for science, Theodore simply stood, trembling from head to foot and pointing at the dish of excellent brain cutlets and repeating: “I get a brain and this is what you do. I get a brain and this is what you do.” By this time the truth had dawned upon the Ionian Society; their dissolution was so sudden as to be amazing. The maid threw her apron over her head and burst into sobs. The inaugural lunch was a failure. But that was not the unkindest thing of all. The brain of the lunatic was at this moment safely upon Theodore’s desk in the study; the cook, who was devoted to Theodore, had spent the whole morning searching from brain, and had found some in the nick of time. The cutlets served to the Society were perfectly genuine brain cutlets. But do you think he has ever managed to persuade anyone of the truth of this? No. The Society is now referred to as the Brainfever Society, and its members are all supposed to be suffering from aberrations brought on by this meal.’ ”