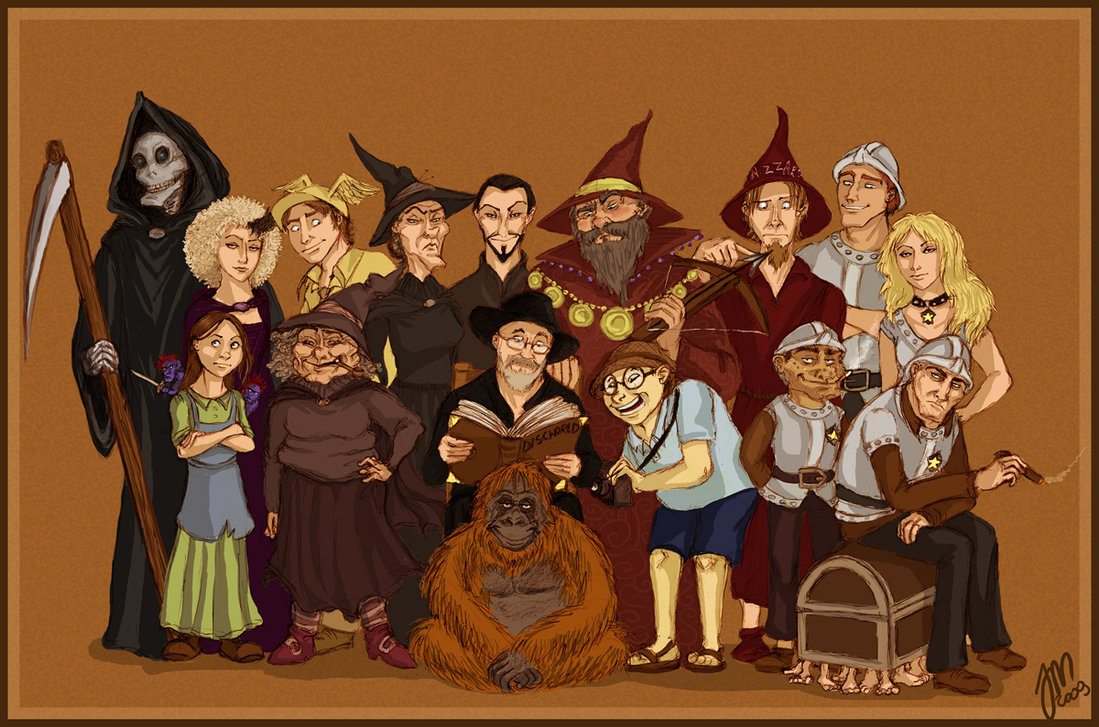 An updated version of the tribute below has now been broadcast in The Science Show on Australia’s ABC Radio National:

Terry Pratchett, who died on March 12th, lived in a village not far from me, and is one of my favourite authors. The newspapers are full of memorable philosophical and humorous quotes from his novels and interviews. But their selections largely miss the point, because Pratchett’s novels are, above all else, concerned with scientific thinking – presented in a way that captures the imagination. As with the IgNobel Prizes, “First, they make you laugh; then, they make you think.”

Let me present my own selection of Pratchett quotes to show you what I mean:

It’s very hard to talk quantum using a language originally designed to tell other monkeys where the ripe fruit is.

My personal favourite. All the philosophers in the world couldn’t have put it better.

The Quantum Weather Butterfly (Papilio tempestae) is an undistinguished yellow colour, although the Mandelbrot patterns on the wings are of considerable interest. Its outstanding feature is its ability to create weather.

This presumably began as a survival trait, since even an extremely hungry bird would find itself inconvenienced by a nasty localized tornado.

The Colour of Magic:

[Magic is bound to obey] the Law of Conservation of Reality; this demand[s] that the effort needed to achieve a goal should be the same regardless of the means used.

Surely this should be added to the standard conservation laws of momentum, angular momentum and energy.

Once, while a student of practical magic at Unseen University, and for a bet, he’d slipped into the little room off the main library – the room with walls covered in protective lead pentagrams, the room no-one was allowed to occupy for more than four minutes and thirty-two seconds, which was a figure arrived at after two hundred years of cautious experimentation …

‘…wizards on it … must all be gifted hydrophobes –‘

‘No, that wouldn’t work,’ said Rincewind. ‘hate is an attracting force, just like love. They really loathe it, the very idea of it revolts them. A really good hydrophobe has to be trained on dehydrated water from birth. I mean, that costs a fortune in magic alone. But they make great weather magicians. Rain clouds just give up and go away.’

New discoveries about hydrophobic (water-repelling) are still being made. See Andrea Sella’s comment on my post 21 “An interlude with Vestal virgins”.

Particles of raw inspiration sleet through the universe all the time. Every once in a while one of them hits a receptive mind, which then invents DNA or the flute sonata form or a way of making light bulbs wear out in half the time. But most of them miss. Most people go through their lives without being hit by even one.

Some people are even more unfortunate. They get hit by them all.

Sadly he didn’t name these particles. By analogy with neutrinos, perhaps they should be called creatinos. Or perhaps inspiritons.

I makes a note in my Almanck, see. I checks. Most things most people believe are wrong.

Granny Weatherwax on the scientific method.

[the library at Unseen University] was probably the only library in the universe with Mobius shelves.

It could be done!

The universe, they said, depended for its operation on the balance of four forces which they identified as charm, persuasion, uncertainty and bloody-mindedness.

Lovely to start this list with “charm” – one of the six types of quark.

All these theories [about “wandering shops”], diverse as they are, have two things in common: they explain the observed facts, and they are completely and utterly wrong.

Great sideways swipe at the “it sounds right so it must be true” type of thinking.

‘What does “quantum” mean anyway?’

IIb shrugged. ‘It means add another nought,’ he said.

There was a notice on the dune.

Below it, in slightly smaller writing, it added:

Mort was one of those people who are more dangerous than a bagful of rattlesnakes. He was determined to discover the underlying logic behind the universe.

Yes, scientists and their ways of thinking are dangerous.

THAT’S BECAUSE TIME IS ADJUSTABLE, said Death … PEOPLE THINK IT IS IMPORTANT ONLY BECAUSE THEY INVENTED IT.

The nature of time is still a fundamental question.

I believe that Pratchett’s novels have done more than have the writings of most science communicators (including myself) to interest people in science and the ways that scientists think. Let’s just hope that a successor soon emerges to carry on the tradition that he started.